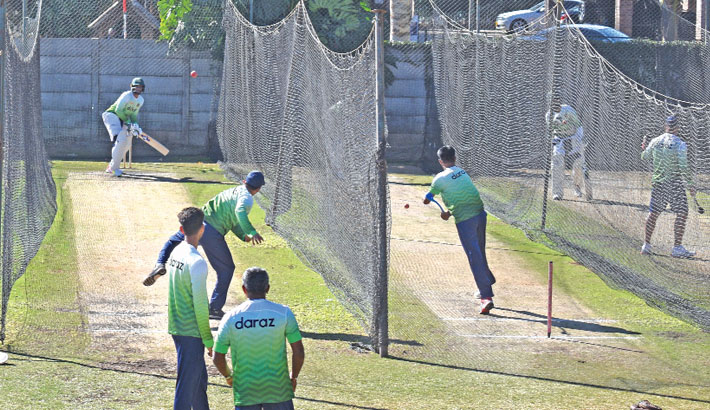 Bangladesh cricketers are seen during a training session at Harare Sports Club in Zimbabwe on Friday. — BCB PHOTO

Bangladesh will try to get used to the conditions and get well prepared before the one-off Test series against the hosts as they take on Zimbabwe Cricket Selection team in a two-day practice match at Takashinga Sports Club in Harare today.

Bangladesh Test team, which arrived in Zimbabwe on Wednesday, didn’t have a proper preparation ahead of the Test series as all their cricketers came straight from playing in the recently-concluded Bangabandhu Dhaka Premier Division T20 League, which ended on June 26.

The Tigers last played a red-ball match during their two-Test series against Sri Lanka in April-May and since then their participation was only limited to white-ball cricket matches.

Bangladesh can heave a sigh of relief as their experienced cricketers Tamim Iqbal and Mushfiqur Rahim, who were suffering from knee and finger injuries respectively, had completed a batting practice session in Harare on Friday along with another senior campaigner Shakib Al Hasan.

However, their participation in the two-day practice match was still in doubt considering both the players and the team management needed to be 100 percent sure about their fitness and they were scheduled to have a meeting on Friday night to decide about it.

Pacer Taskin Ahmed, who debuted in 2014, said that he was ecstatic after making his first visit to Zimbabwe as it was Bangladesh's first tour to the African nation since 2013 and also added that he was happy with their ongoing preparation for the series.

“The preparation is going well. We will play a practice match tomorrow (today). Hopefully, there will be no complaint regarding preparation wise. Playing against Zimbabwe in Zimbabwe isn’t an easy thing. We have to give our best to get good results here,” Taskin said on Friday.

The one-off Test is scheduled to take place on July 7-11 at Harare Sports Club.

The visitors are also scheduled to play three ODIs and as many T20Is in the tour as the ODIs are scheduled on July 16, 18 and 20 respectively while the three T20Is will be played respectively on July 23, 25 and 27, all at the same venue.