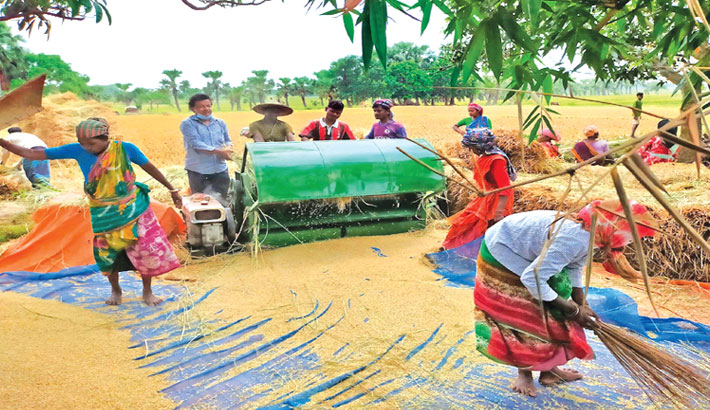 RAJSHAHI: The government has, so far, procured around 1.30 lakh tonnes of Boro rice till Friday during the current season contributing a lot towards food security amidst the novel coronavirus (Covid-19) pandemic.

As part of its ongoing rice procurement drive commenced since May 7 last, the government has bought the food grain from all eight districts in Rajshahi division despite the adverse impact of the pandemic situation, reports BSS.

Faruque Hossain Patwary, Regional Controller of Food, said they have by now procured around 1.27 lakh tonnes of boiled rice and 3,409.77 tonnes of non-boiled sunned (Atap) rice.

In addition to the rice procurement, the government has also purchased 29,268.4 tonnes of Boro paddy during the same period till Friday.

Patwary said procurement drives of the newly harvested rice are going on in full swing everywhere in the division.

He said the government has set a target of procuring 2,23,644 tonnes of boiled rice and 14,530 tonnes of non-boiled sunned rice, while 1,07,346 tonnes of paddy in the division during the current season until August 16.

The enlisted millers have been supplying rice as per terms and conditions of the contract.

“We’ve also procured 38,740.65 tonnes of the wheat in the division till Wednesday last,” the regional food controller said, adding that wheat has been being purchased at Taka 28 per kilogram since April 1.

The government has set a target to procure 40,272 tonnes of the newly harvested wheat in the division during the current season till June 30.

Meanwhile, farmers have produced 35.63 lakh tonnes of Boro rice from 8.15 lakh hectares of land in all eight districts under Rajshahi division during the recent past harvesting season.

Currently, the grassroots farmers are happy after getting better yield and market price of their newly harvested rice contributing a lot towards ensuring food security in the region amid the present adverse impact of the Covid-19 situation.

This year, additional 38,906 tonnes of rice has been produced in the division compared to the target set by the Department of Agriculture Extension (DAE).

Use of latest technologies, proper fertilisation, agronomical managements and suitable weather also made the paddy farmers capable of getting good yield as steps had been taken to ensure smooth Boro rice cultivation this season with close monitoring and supervision by the DAE officials.

Muhammad Moniruzzaman, a farmer of Bijoynagar village under Godagari upazila, is now happy with his satisfactory production of paddy. He has harvested 20 to 22 maunds of paddy from per bigha of land.

Like him, many other farmers of the upazila were highly hopeful of a bumper paddy production this season. Hossain expects a good profit by selling paddy if the market price is satisfactory.

Sub-Assistant Agriculture Officer Atanu Sarker said that the farmers are now delighted over their yield, adding: “Suitable climate conditions and government support to the farmers are being judged as the main reasons behind the good yield.”