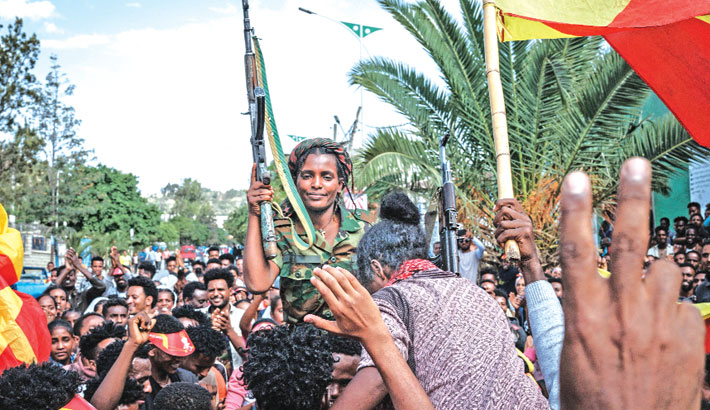 Female soldiers of Tigray Defence Force (TDF) celebrate while sitting on men's shoulders as people celebrate their return on a street in Mekele, the capital of Tigray region, Ethiopia, on June 29, 2021. Rebel fighters in Ethiopia's war-hit Tigray seized control of more territory on June 29, 2021, one day after retaking the local capital and vowing to drive all "enemies" out of the region. – AFP PHOTO

ADDIS ABABA: Rebel fighters in Ethiopia's war-hit Tigray stunned the world this week by retaking the regional capital Mekele, sparking boastful statements by their leaders and rowdy street celebrations by their supporters.

It came exactly seven months after those same fighters were driven out by the army of Prime Minister Abiy Ahmed, a Nobel Peace Prize winner who now finds himself mired in an ugly war, reports AFP.

Abiy's government has since announced a unilateral ceasefire, while the rebels have gone on to seize most of Tigray, the northernmost region of Ethiopia.

As the UN Security Council is expected to hold its first public meeting on Friday on the conflict, world leaders are mulling what comes next -- and whether worst-case humanitarian scenarios can be avoided.

Abiy sent troops into Tigray last November, saying the move came in response to attacks on federal army camps by the region's ruling party, the Tigray People's Liberation Front (TPLF). In the first weeks of fighting the army encountered little resistance as it entered towns and cities including Mekele, prompting Abiy to declare victory before the month was over.

Yet federal forces never fully achieved the operation's stated goals: detaining and disarming the TPLF's leaders. The Tigrayan forces managed to regroup, drawing from deep support among the population to mount an effective insurgency -- something Abiy himself acknowledged in a speech Tuesday.

"When the army passed through a village without witnessing any movement of the enemy, many people suddenly came from behind and attacked and massacred the army using Kalashnikovs or even machetes," Abiy said.

The rebels -- having rebranded themselves the Tigray Defence Forces (TDF) -- launched a major counter-offensive last month that coincided with national elections expected to deliver Abiy a new term.

The TDF has unsurprisingly touted the events of recent days as evidence of its battlefield superiority.

This week, though, Abiy and other top officials tried to downplay the significance of the army's pullback.

Abiy said Mekele had "lost its centre of gravity" and was no longer worth holding.

Redwan Hussein, spokesman for an Ethiopian government task force on the conflict, said the rebels were "no longer an existential threat to the wellbeing of the nation" and insisted Ethiopia needed to focus on other security challenges.

"The war was undoubtedly burdensome for the federal government. Yes, they do have other things that they would like to focus on. But I think that the withdrawal comes from a position of weakness," he said.

At the same time, he added, the TDF has likely "exaggerated" the damage it has inflicted on federal forces.

Throughout the eight-month conflict, Abiy has leaned on firepower from neighbouring Eritrea, which borders Tigray to the north, and Ethiopia's Amhara region to the south.

So far, Eritrean President Isaias Afwerki's government has yet to comment on Ethiopia's ceasefire announcement.

The Eritreans have been involved in some of the conflict's most gruesome massacres, and the United States and the European Union have repeatedly insisted they must leave.

Redwan said this week they already had, and the UN's humanitarian coordination office reported Thursday that they had largely "retreated from Tigray" back towards the Ethiopia-Eritrea border.

TDF spokesman Getachew Reda this week called the federal government's ceasefire declaration "a joke", telling AFP that rebel fighters were prepared to chase the Eritreans all the way back to Asmara in order "to secure Tigray," though it is unclear whether that is their top priority.

Instead, at least in the immediate term, they might focus on Amhara forces who have annexed parts of western and southern Tigray and who have shown no sign of leaving.

"It seems very unlikely that the Tigray Defence Forces is going to embrace any region-wide ceasefire whilst that presence continues," Davison said.

As further conflict looms, the international community is increasingly preoccupied with the dire humanitarian situation in Tigray.

On Thursday, the UN and aid groups confirmed the destruction of a critical bridge allowing aid into Tigray, intensifying fears about a possible "blockade".

The UN said the bridge was "reportedly" blown up by Amhara special forces, but the government on Friday blamed Tigrayan forces.

Officials in Addis Ababa have long stressed their willingness to allow aid into Tigray and provide aid themselves.

They say the ceasefire declaration was partly motivated by a desire to facilitate farming.

But with electricity and telecommunications cut off, flights suspended and most roads into the region now impassable, UN officials and diplomats fear the situation could deteriorate further.

"A credible ceasefire means doing everything possible so that aid reaches the millions of children, women and men who urgently need it."