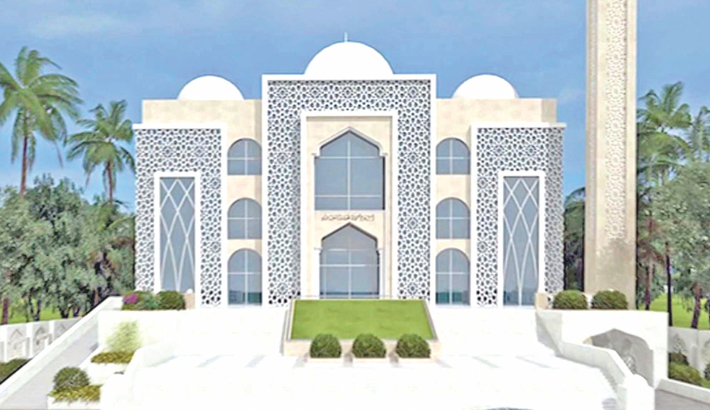 Father of the Nation Bangabandhu Sheikh Mujibur Rahman was endowed with a liberal spirit. He was the real guardian of Islam in the country. During Pakistan period, there was no government subsidy for Hajj pilgrims. Bangabandhu arranged for grants from government funds for the first pilgrims in independent Bangladesh and abolished the Hajj travel tax. Bangabandhu's contribution to the propagation of Islam will forever be written in history. The remarkable steps taken in the service of Islam during three and a half years rule of Bangabandhu are praiseworthy.

Following the footsteps of her father, Prime Minister Sheikh Hasina is also doing a lot for spreading the message of peace of Islam. She has successfully eradicated religious extremism from the country which is a major contribution of her government.The development of mosques and temples by this government is unimaginable. As many as 560 model mosques are being constructed throughout the country. Of late, the PM inaugurated 50 newly-constructed model mosques and Islamic cultural centres  across the country. She virtually opened the modern and well-equipped mosques and cultural centres from her Ganabhaban residence on June 10 this year. It is unprecedented in the history of Bangladesh.At the inaugural ceremony, the Bangladesh Premier said, “Through these model mosques, the culture and messages of Islam will draw the attention of all. The people of the country, irrespective of their religions and castes, will be able to comprehend the essence of Islam."

The PM’s illustrious father Bangabandhu Sheikh Mujibur Rahman always tried to build Bangladesh as a country of peace for all people of all religions. Every step taken during his short rule for overall welfare of the country and the nation was in line with the religious sentiments and values of the Muslim majority people. He did everything in his might for  propagation of Islam. He was not only the architect of an independent and sovereign state, but he also played a pioneering role in propagation of Islam under  patronage of his government. Bangabandhu was a piousMuslim,but he was not a bigot. There seemed to be at least four influences behind his attitude towards Islam and other religions or the development of the religious mind as a whole. Recitation of the Qur'an every morning after the Fajr prayers at homewas a family tradition.  His life was developed and evolved through regular prayers.

Bangabandhu believed in the eternal foundation of liberal non-communal equality and friendship in Islam. His contribution to Islamic progress in independent Bangladesh is unforgettable. The contribution that he made to the propagation of Islam during his brief rule is rare in contemporary history.  Bangabandhu never used Islam for political purposes. He sought to build the country as a land of peace for people of all faiths. He took various steps for the overall welfare of the country and the nation. Among these were economic, social and physical infrastructural measures, as well as practical and effective measures for the propagation of Islam, keeping in mind the religious sentiments and values of the people of Muslim-majority Bangladesh. He made Eid-Miladunnabi (PBUH) a national celebration in independent Bangladesh. He was the first to organise Haqqani Alem-Ulama. He took initiatives to present the true image of Holy Islam to the people. Under his direction and patronage, an institution called Sirat Majlish was formed in Dhaka. As the head of government, Bangabandhu inaugurated the Eid Miladunnabi (SA) mahfil atBaitul Mukarram mosque.

In Islam, alcohol, gambling, housie and anti-social activities are completely forbidden. Although Pakistan was created in the name of Islam, alcohol, gambling, housie and other anti-social activities continued freely during the 24 years of Pakistani rule. After the independence of Bangladesh, Bangabandhu was the first to enact a law banning alcohol, gambling, housework and anti-social activities. The present Suhrawardy Udyan in Dhaka was called Racecourse Maidan during Pakistani period. Horse race was held there. There were gambling, house and betting competitions in the name of horse racing. Many people would have lost by participating in this competition and losing the bet. After independence, Bangabandhu returned to his homeland and stopped the horse racing competitions held at the racecourse ground and changed the name of the racecourse ground to Suhrawardy Udyan.

Our beloved Prophet (peace and blessings of Allaah be upon him) strongly urged us to plant trees. He said, "Even if you think that the hour will come tomorrow, plant a sapling of a tree today." Inspired by this teaching of the Holy Prophet (PBUH), he planted a tree and named the place "Suhrawardy Udyan" to erase the remnants of un-Islamic activities on the racecourse ground. The trees of Suhrawardy Udyan in Dhaka are carrying the memory of Bangabandhu.9. Allocation of government property in Tongi for World IjtemaTabligh Jamaat is a non-political organization. Invitation in the way of Islam Dewai is the only work of this organization. Bangabandhu allotted a large space in Tongi for the World Ijtema of Tabligh Jamaat so that this organization could conduct Islamic da'wah activities freely in Bangladesh. Every year thousands of preachers from different countries gather in this congregation. Since Bangabandhu had allotted this place to the Tongi World Ijtema, millions of Muslims who have come to the Ijtema are getting the opportunity to gather here and adopt action plans and spread to different parts of the world to conduct da'wah work.

The mosque in which the Markaz of the Tabligh Jamaat is held centrally in Kakrail at present is very small. Bangabandhu allotted space for the Markaz Mosque of the Tabligh Jamaat of Kakrail and the mosque was expanded under his direction.11. Russia, the Soviet Union, was the first communist country to send a preaching congregation to Russia. No one was allowed to spread Islam in that country from abroad. Russia's cooperation in our war of independence laid the foundation for a strong friendship between the leaders of that country and Bangabandhu. Bangabandhu took this opportunity to arrange for the first post-independence Russia to send a Tabligh Jamaat to the Soviet Union. Father of the Nation Bangabandhu Sheikh Mujibur Rahman laid the foundation of the da'wah activities of Tabligh Jamaat which are being conducted in different countries of the former Soviet Union.12) In the Arab-Israeli war, sending support and aid to the rest of the world. In the Arab-Israeli war in 1973, Bangabandhu supported the Arab world and in the war, Bangladesh tried to contribute as much as it could. At Bangabandhu's direction, a volunteer force with 100,000 pounds of tea and a 28-member medical team was sent to support the establishment of a Palestinian state in the Arab-Israeli war.Establishment.

Bangabandhu attended the session of the Organization of the Islamic Conference (OIC) held in Lahore in 1974 with the aim of building good relations with the Muslim world. Bangabandhu's speech to the Muslim leaders on Islam and Bangladesh at the OIC conference raised Bangladesh's profile in the Muslim world, including the Arab world, and forged strong ties with the Muslim world leaders. Whoever makes a huge contribution, his example is rare in the whole world. Yet a group in the guise of Islam continues to try to portray Bangabandhu as anti-Islam, which is still going on - in various ways, in various forms. In the end, Bangabandhu's Islam was the essence of Islam, not business or political Islam. On the other hand, he maintained the continuity of the Bengali tradition by patronizing religious democracy or religious pluralism in democratic Bangladesh. The religious tradition of Bengal is one of plurality and tolerance. As a result, Islamic values were preserved and expanded during his tenure. Bangabandhu showed how to show the beauty of Islam in the diversity of religions.