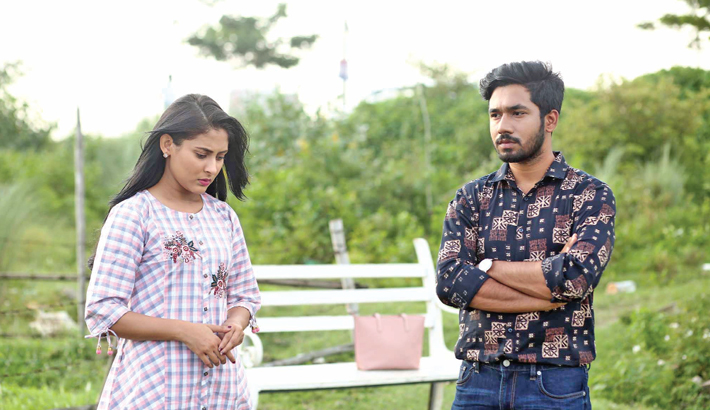 A scene from Chumki Cholechhe

The drama tells the story of Chumki, who is an employee of a multinational company. She is more interested in acting rather than her task. But not in cinema or drama, Chumki love to act in office. When she wants to gain something she starts crying. Her tear makes everyone get emotional. Then, something interesting happens in her life.

In the play, Mehazabien will portray the character of Chumki while Basar will be seen as her love interest.

Director Mohim said, “The drama ‘Chumki Cholechhe’ has a unique storyline. The audience will get to see Mehazabien in an interesting avatar. Khairul Basar acted well too. I hope, this will be an entertaining piece.”

The drama will be released on the occasion of Eid-ul-Azha under the banner of CMV.

Mehazabien Chowdhury began her acting career after winning the beauty pageant ‘Lux Channel i Superstar’ in 2009. She has acted in numerous television projects and came to the limelight after acting in a TV commercial for a mobile phone operator. Mehazabien rose to national prominence for her performance after the critically acclaimed telefilm ‘Boro Chele’ in 2017.

On the other hand, Khairul Basar grabbed the audience’s attention through ‘Close-up Kache Ashar Golpo’ in 2000. He also appeared in the films ‘Iti, Tomari Dhaka’ and ‘Unoponchash Batash’. Basar acted telefilm ‘Chorer Master’ was well received by the audience on Eid-ul-Fitr. His latest project is Ashfaque Nipun directed web series ‘Mohanagar’, which is now streaming on an OTT platform.