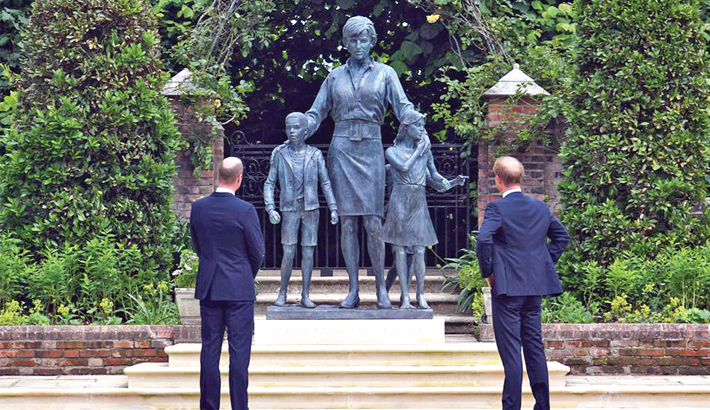 The Dukes of Cambridge and Sussex have united to unveil a statue of Diana, Princess of Wales, saying “every day we wish she were still with us”, reports BBC.

William and Harry came together for a ceremony in Kensington Palace’s redesigned Sunken Garden, on what would have been their mother’s 60th birthday. It was their first appearance together since the Duke of Edinburgh’s funeral in April. “We remember her love, strength and character,” they said.

“Qualities that made her a force for good around the world, changing countless lives for the better.” They said they hoped the statue would “be seen forever as a symbol of her life and her legacy” and thanked “all those around the world who keep our mother’s memory alive”.

Harry, who lives in the US with his wife, the Duchess of Sussex, and their two children, arrived in the UK last week in order to complete his quarantine ahead of Thursday’s event.Diana’s brother, Charles Spencer, was among those at the ceremony at Kensington Palace, Diana’s former home in London.

When William and Harry commissioned the statue of their mother in 2017, they said they hoped it would help visitors to the palace “reflect on her life and her legacy”.

Kensington Palace said the Sunken Garden had been “one of the princess’s favourite locations” when she lived there.

More than 4,000 flowers have been planted for the garden’s redesign, which has taken 1,000 hours to complete.

The garden, which sits within London’s Hyde Park, will be open to the public to visit for free from Friday, in line with Kensington Palace’s opening hours.