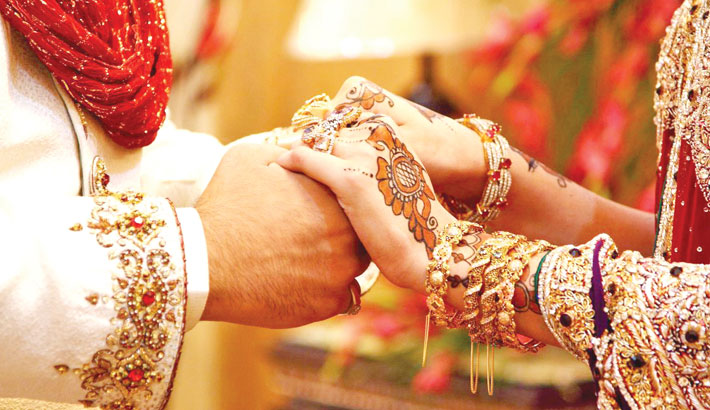 Most Indians see themselves and their country as religiously tolerant but are against interfaith marriage, a survey from Pew Research Center has found, reports BBC.

People across different faiths in the country said stopping interfaith marriage was a “high priority” for them. The research comes after laws were introduced in several Indian states criminalising interfaith love.

Pew interviewed 30,000 people across India in 17 languages for the study.

The interviewees were from 26 states and three federally administered territories.  According to the survey, 80 percent of the Muslims who were interviewed felt it was important to stop people from their community from marrying into another religion. Around 65 percent of Hindus felt the same.

The survey also asked about the relationship between faith and nationality. It found that Hindus “tend to see their religious identity and Indian national identity as closely intertwined”.

Nearly two-thirds of Hindus (64 percent) said it was very important to be Hindu in order to be “truly Indian”.

The study found that despite sharing certain values and religious beliefs, members of India’s major religious communities “often don’t feel they have much in common”.

“Indians simultaneously express enthusiasm for religious tolerance and a consistent preference for keeping their religious communities in segregated spheres - they live together separately,” the study said.

Many lead religiously segregated lives, it added, when it comes to friendships, and “would prefer to keep people of certain religions out of their residential areas or village”.

It is in response to what right-wing Hindu groups call “love jihad” - a baseless conspiracy theory that accuses Muslim men of luring Hindu women with the sole purpose of converting them to Islam.

The opposition to interfaith relationships is something Sumit Chauhan and his wife Azra Parveen can relate to. Chauhan is from a Hindu family, although he identifies by his Dalit caste (formerly known as untouchables). Parveen is a Muslim.

Chauhan said his Hindu relatives “had some misconceptions about the Muslim community, but I convinced my mother and sister and brother.”

But for Parveen, things were not as simple. Her family refused to let them marry, she said. The couple decided to tie the knot in secret, and Parveen’s family did not talk to the couple for almost three years, Chauhan said.

And even though they are now on speaking terms, Parveen’s parents still won’t publicly acknowledge the marriage.

“Last year, my wife’s younger sister got married but we were not invited,” Chauhan said. “You shouldn’t have to change your religion to marry someone you love.”