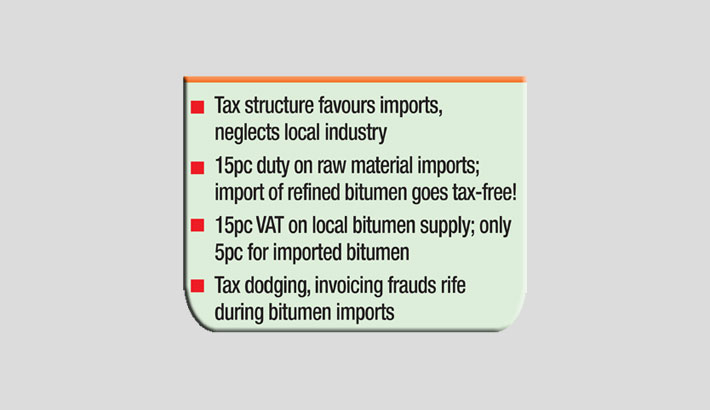 Top businessmen and tax analysts have termed the 26 per cent tax on the production of bitumen unjust, illogical and unfair.

They have alleged that although the Prime Minister is sincere about industrial protection, some government officials do not contribute to the vision.

"A group in the government is creating obstacles for domestic industrial development," they said, adding that the owners of industries are passing through a crisis period.

Experts have demanded to cut tax on bitumen, which is one of the most important ingredients for the construction of roads and highways across the country.

"There cannot be two rules on bitumen in one country," they have said. They said that an unprecedented tax was imposed on the production of the bitumen by enormously relaxing the rules on its import.

"Such kind of fiscal policy is contrary to the interest of the domestic industries," they said. They think the decision of tax hike has violated the rules of the World Trade Organisation (WTO). On the issue, Industries Minister Nurul Majid Mahmud Humayun has said that all the domestic industrial sectors, including bitumen, should get protection. “The authorities concerned will have to follow the government’s industrial developmental policy while deciding on tax.”

M A Momen, vice president of Federation of Bangladesh Chambers of Commerce and Industries (FBCCI), said imposing 26 percent tax on locally produced bitumen is unjust and illogic; tax cannot be over 5 percent on import of main raw materials for any domestic industry.

The FBCCI leader thinks local industries are passing through a crisis period, so tax must be reduced on the production of bitumen. He also suggested checking market manipulation and breaking the syndicate of the bitumen importers.

He also said the matter of tax hike on the bitumen was discussed in Parliament.

Although the 26 percent tax on the bitumen production has illogically remained, tax has decreased on its import.

It costs at $570 to import each tonne of bitumen raw materials while the import of refined bitumen costs only $260  per tonne.

The businessmen and business analysts have demanded the government to address the discriminatory tax structure to protect the local industries.

Trade and revenue policy analyst Manzur Ahmed has said that tax must be lowered on import of raw materials of the domestic industries.

He further suggested bringing down the supplementary duty on imports the petroleum oils and crude, the main raw material for bitumen production, to 1 percent.

“As the 15 percent VAT is not applicable for import, it shouldn’t be imposed on local production. Besides, the advance tax of 3 percent and advance income tax of 2 percent on the sector should be reconsidered. Such kind of discriminatory tax structure may violate the regulations of the World Trade Organization(WTO). It’s a reverse action against international trade.”

Business leaders have said Advance Income Tax (AIT) shoots up cost of business. Earlier, Advance Trade VAT (ATV) was imposed on commercial import. Now, AIT has been imposed on raw materials import, which should be withdrawn.

“Although the Prime Minister has attached importance to protection of local industries, some government officials are not serving properly,” former FBCCI president Kazi Akram Uddin alleged.

Not only bitumen industry, it won’t be possible for any local industry to run business by paying 26 percent tax, he observed.

“No countries in the world have been able to make progress without protecting their own industries. We have to understand that the country’s expected development won’t be possible without industry. The country will not move forward if local industries are not encouraged,” he said.

But 26 percent tax on bitumen industry will not ensure protection of local industries, which is very important for a new industry like bitumen for flourishing.

He also suggested looking into whether any undercover agents in the government are trying to create hindrance to industrial development in the country as local industry is not being safeguarded in line with government announced industrial policy.

“Bitumen is very important for road construction. But low-quality bitumen is being imported through fake certificates. I’m urging the Prime Minister to look into the matter,” Harun told the House.

Leader of the House and Prime Minister Sheikh Hasina was present in the House at that time.

The BNP MP said reports are being published in newspapers on the issue for the last one month.

The country needs more investments from home and abroad at this time of pandemic. The development of communication system is the  first criteria for economic development. Roads and highways are the main communication verticals for any country.

Bitumen is the main factor to ensure the sustainability of roads. The country’s annual demand of bitumen is around 5 lakh tonnes, which is gradually increasing every year.

The main use of bitumen is in road construction. Besides, the item is used to build runways and footpaths. Bitumen is also used on layer inside tank or protecting the surface on bank of river or sea.

The chemical product has widespread use in industry as the item acts as insulation to electricity. For manufacturing insulating tapes, water proof cloth and bitumen are being used for long time.

Bitumen is also used in burnish, oil paint, alternate to rubber enamel and cold storage. In electronics industries, the item is used electronic battery and refrigerator.

The petroleum oils and oils-obtained mineral crude are the main raw materials for producing bitumen. The harmonized system (HS) code is 2709.00.00 for the raw material of bitumen.

As a result, businesses pay 26 percent tax in total to the exchequer apart from paying $40 as tariff per for each barrel of crude oil.

When businessmen import bitumen as bulk item, they pay Tk 3,500 for importing 1 tonne of product apart from 2 percent AIT and 3 percent AT.

“The authorities concerned should change the discriminatory tax structure for the local industry. As we know that the responsibility to protect the industries lies on the government,” he said.

Besides, over-invoicing is widespread in bitumen import. Thousands of drums are being released though over-invoicing everyday, customs sources informed. As a result, the government is losing huge revenue from this segment.  The illegal import of finished bitumen could not be checked due to unknown reasons.

The customs authorities remain silent on the widespread supply of sub-standard bitumen. The whole process of bitumen import became questionable due to over-invoicing and tax dodging by the importers.

Bitumen is imported without approval of respective stakeholders --- BSTI, Bangladesh Petroleum Corporation and BUET. And the importers get release certificate in collaboration with a section of dishonest staff at Chattogram Port.

“They should enhance monitoring to stop irregularities in invoicing. Bitumen import should be discouraged as quality bitumen is been produced in the country,” he said.

Import duty structure should be revised to save local bitumen industries and ensure quality products for the sake of the greater interest of the local industries, he added.

As a result, production cost for local Bitumen is higher than the imported bitumen, which will make the survival of local producers difficult.

It has been learnt some importers have supplied imported Bitumen in the market, taking the benefits of low duties though there is a sufficient supply of local bitumen.

To this effect, businessmen has to suffer loses as they failed to meet the sales target. Besides, the government has to lose a huge volume of hard-earned foreign currency and duties. If such situation continues for long, local bitumen producers will have to shut their operations.

Sources say that the country’s first Bitumen Asphalt Plant, which is also capable of exporting bitumen after meeting domestic demand, has been established in the country aiming at supporting the sustainability of the country’s road infrastructures.

Recalling the steps of imposing 300 per cent duties on cement import in 2000 to save this sector by Prime Minister Sheikh Hasina, experts said the import and other duties need to be imposed on bitumen import to help flourish the local industry.