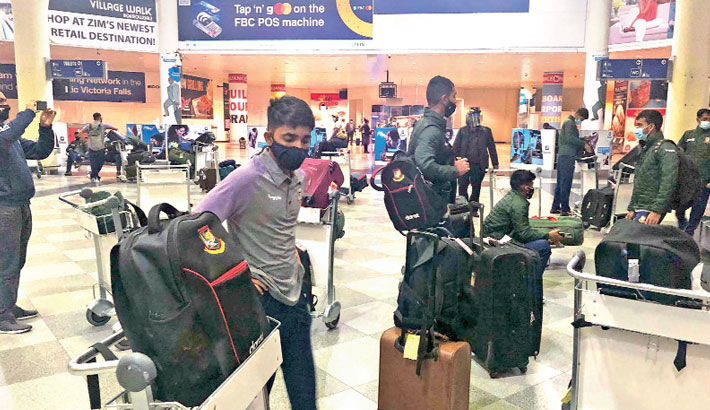 Members of the Bangladesh Test squad led by Mominul Haque reached Zimbabwe on Wednesday ahead of their full-fledged series against the hosts, comprising one Test along with three ODIs and as many T20Is.

The Tigers, who underwent the Covid-19 test upon their arrival in Harare with transits in Doha, Qatar and Johannesburg, South Africa, are expected to start their practice from today after having a rest day on Wednesday.

The newly appointed batting and spin consultants Rangana Herath and Ashwell Prince joined the squad from Doha and Johannesburg respectively, BCB informed through a statement.

All-rounder Shakib Al Hasan and opening batsman Shadman Islam are expected to join their teammates in Harare later on Wednesday as the former is coming from the USA while the latter couldn’t leave Dhaka with the rest of the members due to some visa issues.

Members of the white-ball format are expected to leave for Zimbabwe in July second week as they will have a short training session at the Sher-e-Bangla National Stadium from July 4.

Bangladesh, who last played in Zimbabwe in 2013, managed to finish both Test and T20I series 1-1 but suffered 1-2 defeat in the ODI series.

The Tigers need to be cautious in the lone Test series in Harare as last time they suffered great humiliation in the Test series opener after losing the match by 355 runs against the hosts although they won the second match by 143 runs to level the series.

The tourists will play a two-day practice game on July 3-4 before taking on the hosts in the one-off Test series on July 7-11.

The visitors are scheduled to play another warm-up fixture on July 14 - two days ahead of the ODI series.