Carpeted by huge swaths of rainforest and punctuated by gushing rivers and smoking volcanoes, the Democratic Republic of Congo (DRC) offers ultimate African adventure. This Central African country is the most-populous Francophone country in the world. DRC was first inhabited by Central African foragers around 90,000 years ago and by the Bantu people about 3,000 years ago. It achieved independence from Belgium on 30 June 1960 under the name Republic of the Congo. This country is extremely rich in natural resources but has suffered from political instability, lack of infrastructure, corruption, colonial extraction and exploitation with little widespread development. The Democratic Republic of the Congo is named after the Congo River, which flows throughout the country. The Congo River is the world's deepest river and the world's second-largest river by discharge.

Different armed groups are vying for gaining control of territory for last two decades in eastern DRC. Besides Mai-Mai, a term refers to any kind of community-based militia group formed to terrorise people, are also active. Violence, displacement, disease, poverty and political instability deepen the humanitarian crisis. United Nations Organisation Stabilisation Mission in the Democratic Republic of the Congo (MONUSCO) has been authorised to carry out its mandate relating to the protection of civilians, humanitarian personnel and to support the government in its stabilisation and peace consolidation efforts. Members of Bangladesh Armed forces have actively participated in this mission.

I passed one year in this region because of my assignment with UN. Between 2016 and 2017 I spent most of the time in Mushkae area. This area is in North Kivu Province. Mushake area is surrounded by hilly regions at a height of approximately 7000 ft from sea level. Most of the local inhabitants are poor and deprived of basic amenities like medical treatment, education, water supply and sanitation. This area is known as “little Switzerland” for its lush, green hills and picturesque villages. I used to enjoy walking through beautiful mountainous landscape where numerous cows graze. These mountains are very wet, since they receive constant rainfall and often remain covered with clouds. February offers a reprieve from the rainy season. Surrounding hilly roads are not paved and often soften into an enormous stretch of mud. Proceeding towards North West next major city is Masisi.

Masisi town lies at an average altitude of 1,600 metres. Masisi is the location of a number of cheese factories. Most of the cheese produced in the DRC comes from Masisi Territory. In number of places there was sharp cliff or steep slope just on road side. In many places the road quality could not support loaded vehicles to ply as the soil profile was clay. Vehicles stuck in the muddy road were very common. While descending from hill, travellers can feast their eyes on savannah grasslands before reaching a virgin forest. 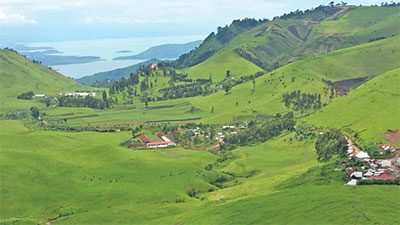 Proceeding further North West major city is Nyabiondo. On the way a few colonial structures made by Belgians and waterfalls can be seen. Basic goods are priced so high that they are out of reach for many of the area’s poorest people. I came to know that in surrounding inaccessible hills Pygmy people reside. They are of ethnic groups whose average height is unusually short. The rebel fighters are accused of slaughtering and eating Pygmies during unrest. Some believed that they are less than human or that eating the flesh would give them magic power.

This hilly road ran up to Walikale. Conditions on the road prompt poetically grim words of warning from frequent travellers. MONUSCO is working to refurbish the motorway to meet modern standards. Walikale is North Kivu’s richest mineral patch. Cassiterite, diamonds, gold, bauxite and many other coveted minerals and elements are plentiful here. The area is covered with rich soil, but farmers and traders struggle to transport their crops to markets.

Sake is located 20 km east of Mushake. It is located at the north-western extremity of Lake Kivu. This lake contains dissolved hazardous methane.

Goma, the capital of North Kivu province is located 25km east of Sake and around 15 km south of the active Nyiragongo Volcano. The road in and around Goma had been damaged due to the volcanic eruption. Hijacking frequently takes place here. Bordering Gisenyi is connected to Kigali, the Rwandan capital by road. Visitors can visit local markets, buy local Congolese crafts, see city monuments and statues. A few aristocrat hotels are on the bank of Lake Kivu which provides excellent views. Chukudu, a wooden scooter is widely used by locals to transport any commodities. The sense of adventure is palpable on the road that shoots out of Goma.

Virunga National Park, home to endangered mountain gorillas lies north of the city. It is an UNESCO World Heritage site. The park contains sub-Saharan Africa’s biodiversity and many rare species. Virunga is the oldest national park in the Africa. Active volcano Nyiragongo lies here and sends plumes of smoke into the sky which is visible from far distance. For adventurous tourists the trek to the top is an absolutely unmissable experience. Boiling Lava Lake in the crater of Nyiragongo is unique. In January 2002, eruption lave stream travelled up to Lake Kivu. Suddenly on 22 May 2021 evening it erupted turning the night sky an eerie red and sending a wall of orange lava downhill towards the lakeside city of about 2 million people. Thousands of people fled their homes and many took refuge in neighbouring Rwanda. By first day lava flow reached up to Goma International Airport. Domestic and few International flights operate from Goma Airport. In following cities I travelled by aircraft as there was no good road connectivity.

Beni is a city in north eastern Democratic Republic of the Congo. The icy peak of Rwenzori Mountains located on the border between Uganda and DRC can be seen from here. Beni is home to a market, an airport, a University and a UN camp. Insurgency activities marked in and around Mavivi area. Area north to it was plagued by waves of deadly attacks of insurgent groups. There UN was conducting special operation against Allied Democratic Forces (ADF). Ituri Province is at further North and Bunia is its capital. The area's natural resources include gold mines over which militias and foreign forces have been fighting. It has physical connectivity with neighbouring South Sudan and Uganda.

Kalemie lies around 720 km South of Goma. It is located on the west coast of Lake Tanganyika. It is the longest freshwater lake and second deepest lake in the world. The lake is oriented northwest to southeast and hemmed in by mountains that run parallel with its shores. Mountains of Tanzania can be seen on the far bank. The lake and its environs support a wide array of subsistence and commercial activity as well as a remarkable assemblage of tropical flora and fauna, including highly diverse populations of endemic fish.

Lubumbashi is located in the country's south-eastern part, along the border with Zambia. It is the capital of the Haut-Katanga Province. It is the mining capital and base for many of the country's biggest mining companies. This area produces maximum gemstone Malachite of world market. Malachite is a deep green opaque gemstone with parallel bands and concentric rings. Malachite is used mostly in necklaces and bracelets. Malachite was used as a mineral pigment in green paints from antiquity. I was astound to know that the uranium for the Manhattan Project and the Atomic bombing of Hiroshima and Nagasaki came from Shinkolobwe mine of this region. Motor taxi is very famous here as public transport. The University, the Library, Saints Peter and Paul’s Cathedral, the railway station, the art-deco style Court of Justice are some of Lubumbashi’s most important buildings of colonial architecture. I also visited Kasumbalesa border check post between DRC and Zambia. Commercial vehicles cleared at this border travelling from and destined to South Africa, Tanzania, Namibia, Mozambique, Zambia, and Zimbabwe. Zambia’s main exports to the DRC are sugar, cement, timber, mattresses, acid, mealie-meal, agricultural products, and cooking oil, among others.

Two hours and 25 minutes is the average flight time from Goma to Kinshasa, the capital. This air journey is mostly over the second-largest rainforest in the world. These forests are increasingly threatened by slash-and-burn agriculture and logging for timber, charcoal and fuel wood. Kinshasa Airport is named after the nearby Ndjili River. It is located along the south bank of the Congo River and directly opposite the city of Brazzaville, capital of the Republic of the Congo. These are the only two capitals in the world that are in direct view of one another. Kinshasa was established as a trading post and was named Léopoldville in honour of King Leopold II of the Belgians. Tourists need to be cautious when travelling by car as it is not uncommon for opportunist thieves to snatch belongings. It is the largest French-speaking city in the world. The Grand Marché or Central Market is the largest open-air market and offers visitors clothing, textiles, household electronic goods, car replacement parts, spices, snacks, jewellery and crafts. Strolling along the powerful Congo River, golfing and traditional foods surely entice anyone.

Tourism is largely dependent on stability and connectivity. DRC is home to eight national parks and home to many endangered species. Road development will surely increase tourism flows between the neighbouring countries. Tourists can enjoy wildlife, indigenous cultures, and geological phenomena not found anywhere. Despite some of the political and social problems DRC still holds a powerful allure for travellers searching for wonders, adventures, history and natural magnetism.

The writer is a civil Engineer and serving Military Officer