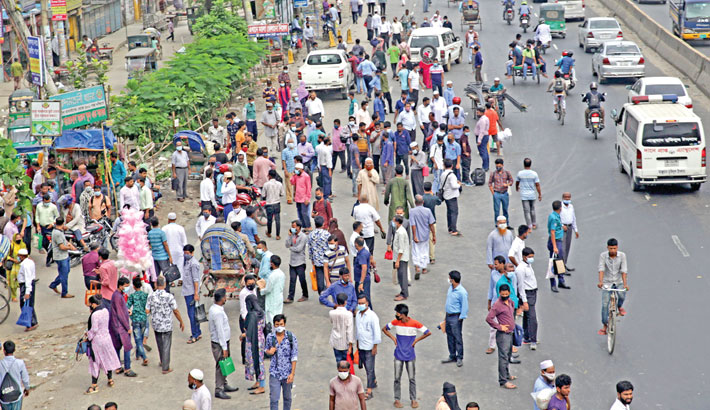 Most of the office-goers had to reach their workplace by rickshaws or ride-sharing bikes.

As per Sunday’s gazette on the three-day restrictions, all forms of public transport, except rickshaws, will be restricted. Government and private offices may remain open with only essential staff, the gazette said.

Hundreds of people were seen waiting at different bus stands for hours together for transport to go to their respective destinations. Many were also seen going to their destinations on foot.

Asma Shobnom, an employee of a private company, had to go Dhanmondi from Mirpur 10. After waiting for a long hour without getting any transport, she started her journey on a rented bike for Dhanmondi.

She said “Limited lockdown had been announced. The office is open. I have to go to the office to save my job. Ordinary people like us are suffering for this.”

Many were seen talking with the drivers of covered vans and private cars and microbuses asking to drop them off at their workplaces. They were boarding whatever vehicles that agreed to take them.

The number of rickshaws was less than the demand. Taking advantage of the situation, rickshaw pullers were charging extra fares from passengers. Bikers were also charging three times more than the regular fare.

A lot of private cars were seen on the city streets and subsequent traffic congestion at various points.

Aminul Haque, an employee of a private company, came to Mirpur 10 on foot from Mirpur 2. After waiting for half an hour, he could not get any vehicle to go to Gulshan.

He said “The government has declared a lockdown without closing the office. Now we are suffering. I'm already late for my office.”

Agitated office-goers blocked Matuail point at Dhaka-Chattogram highway for half an hour from 8:30 am. On information, police rushed to the spot and convinced the protesters to clear the road.

According to the gazette notification on Monday,  all government and private offices will have to arrange their own transport to carry a limited number of officials and employees to work stations during the fresh restrictions. All shopping malls, markets, resorts, tourist spots, community and recreation centres will remain closed.

Food shops, hotels and restaurants can remain open from 8:00 am to 8:00 pm only for providing takeaway/online services.