Sheikh Hasina – An Inspiration for the Helpless to Live 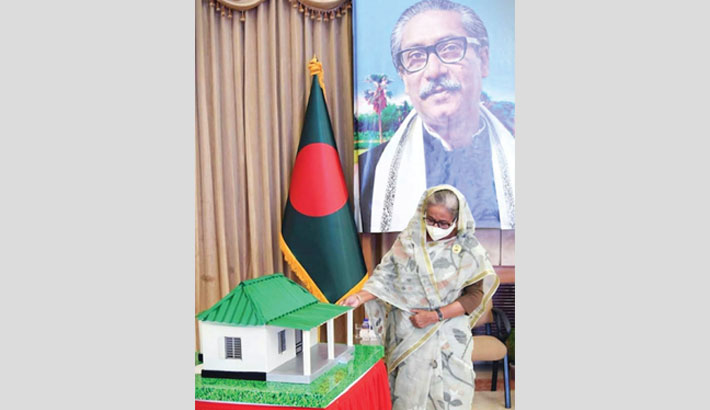 In the second phase of the shelter project, Prime Minister Sheikh Hasina gifted semi-finished houses with two hundred acres of land to 53,340 families. She handed over land deeds and house keys to the landless and homeless people in 459 Upazilas across the country through video conference from Gonobhaban on Sunday morning. At that time, the Prime Minister said, "Since I could not go because of Corona, the local MP, DC and UNO will hand over the land deeds and house keys on my behalf." Virtually connected from 459 Upazilas of the country, in the presence of the Prime Minister, the destitute families received the land deeds and house keys from the hands of the Upazila Nirbahi Officer as her representative. This act of humanity is not her first. There is no stopping the realisation of the dream of humanity.

She first became the Prime Minister in 1996 and undertook the Hill Tracts peace plan. UNESCO awarded her the 'Hupe-Boani' Peace Prize for ending two decades of instability and restoring peace in the Hills. Sheikh Hasina was widely acclaimed for sheltering about one million Rohingyas who were persecuted from Myanmar. She was awarded the title of 'Mother of Humanity' for extending the hand of humanity to helpless people.

The Prime Minister received the IPS International Achievement Award and the 2017 Special Distinction Award of Leadership Medal for her visionary leadership and her humanity on the Rohingya issue and responsible policy in sheltering the Rohingyas. The Inter Press Service (IPS), one of the world's leading news agencies, the New York Times, the Global Hope Coalition, a network of three non-profit foundations based in Zurich and Hong Kong, presented the two awards to Sheikh Hasina in 2016. In addition, Sheikh Hasina received the Netaji Memorial Award (1996), Pearl S Buck Award (1999), CERES Medal, Mother Teresa Medal, MK Gandhi Medal, Indira Gandhi Peace Prize (2009) and Indira Gandhi Gold Medal. The Head of State Medal and Global Diversity Award (2011, 2012) has also been received by Sheikh Hasina.

She seems to be the proudest daughter of Sheikh Mujibur Rahman. In his glory, she will be more glorious all over the world. Because Sheikh Mujibur Rahman is the embodiment of the country he was dreaming of. All the children of the world are proud of the identity of their parents, which is normal. However, Bangabandhu's sacrifice, patriotism and struggle should be emulated. We can see the dreams seen by Bangabandhu in the eyes of Sheikh Hasina too. It seems that Sheikh Hasina will realise the unfulfilled part of the Golden Bengal as seen by Bangabandhu. Prime Minister Sheikh Hasina has already set a unique precedent in the world by constructing the Padma Bridge with our own funds.

She has shown the dream of a new life to about 60,000 homeless families by giving them home ownership at a time when the world is going through the worst pandemic ever known to man. She also gave the helpless and homeless people some means of survival in these trying times. It has set an example in the history of the world in the establishment of humanity and rights. Under the shelter project of the Prime Minister's Office, the process of providing permanent houses with land to about nine lakh people across the country is underway. In the first phase, about 60,000 houses have been built. Prime Minister Sheikh Hasina inaugurated the program in a video conference from Gonobhaban on Saturday (January 23). Ashrayan Project-2 is the first and only such undertaking in the world in which so many people have been given home and land ownership by any government. This is basically the gift of Prime Minister Sheikh Hasina for the poor and helpless people on the Mujib birth centenary occasion.

A house is not just a shelter, it is also recovering self-respect. The owners of these houses will also get various services for their family; education-health facilities, civic amenities including potable water will also be provided. Self-reliance will be inculcated through training. It will alleviate their poverty. Economic security will be ensured. Ever since they got the house, we have seen different expressions from people of different ages on the news. This has ignited a passion for a good life in those who had nothing. This is the need of the people – to have hope ignited in them. In this way, Sheikh Hasina is showing dreams to nine lakh families across the country. The dreams of survival. The dreams of ensuring their rights. The dreams of becoming self-reliant and prosperous.

It takes a leader of great height to have political wisdom, foresight, sacrifice, humanity with power. Three times in power with political wisdom and foresight, she is the mother of humanity today because of her sacrifices. She is praised in the world because of her humanity. Sheikh Hasina is ranked 30th in the list of 100 most powerful women in the world by the US-based magazine Forbes. In 2016, Sheikh Hasina was named in Time Magazine's list of 100 most influential people (she is 21st out of 26 people in the Leaders category). Bangladesh ranks seventh among 155 countries in women’s empowerment.

Bangladesh is a democratic country. The people have all the power. Though many rulers do not think so, Prime Minister Sheikh Hasina has consistently focused on voters who have no political affiliation. Inspiring them to live a good life. We have seen that many old and young Bengalis have written letters directly to her. And she has always taken immediate steps to remedy any wrong. Grass-roots people have also spoken to her. Which has no previous history. Even when a person is on the verge of death, helpless and with no hope of recovery, the Prime Minister has inspired them to live by being by their side.

The talented people of the country have become famous for their work. They inspire us even after they are gone. This humane thought of Sheikh Hasina inspires not only Bangladesh Awami League but also people of all walks of life in Bangladesh, as a symbol of trust. I wish her a long life. Because if she survives, we will see a more humane Bangladesh. Dreams of all people will be fulfilled. Poor people will also be able to dream. Bangladesh wishes for the dreams of Sheikh Hasina to come true.

It doesn't take much to do good in the world. It is not difficult to serve the people well. All you need is good thinking, proper mindset and humanity. Dreams are also needed. And the conviction to work to realise the dream. However, it is hundred per cent true that the most difficult task is to nurture good thoughts and a sense of humanity. Not all people on earth have humanity. If they had humanity, there would be no crime, conflict, torture and helpless people in the world. Not many are with the helpless people. But Sheikh Hasina, the mother of humanity, is dreaming about those people of Bangladesh. She is inspiring their eyes with the dream of Golden Bangladesh. So we can say that Sheikh Hasina is the inspiration for the helpless and the poor to live a better life.