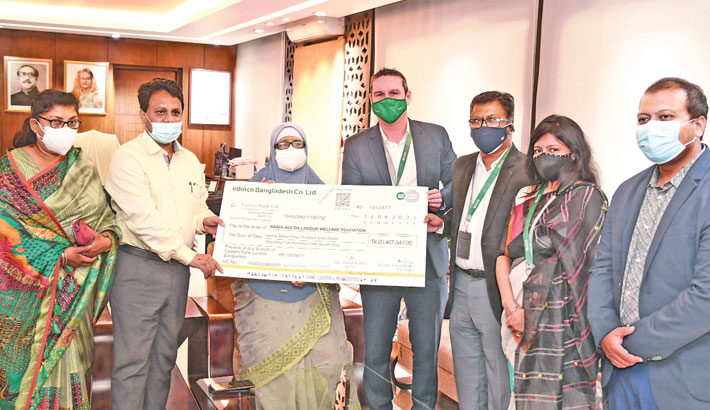 State Minister for Labour and Employment Begum Mannujan Sufian receives a cheque for Tk 20.46 million from edotco Country Managing Director Ricky Steyn in the conference room at the Secretariat on Monday.

The Bangladesh Steel Re-Rolling Mills Limited (BSRM) and edotco Bangladesh have donated Tk 51.06 million from a part of their profit to the Labour Welfare Fund under the Ministry of Labour and Employment.

BSRM Deputy Managing Director Tapan Sengupta and edotco Country Managing Director Ricky Steyn handed over a cheque for Tk 5,10,63,721 to State Minister for Labour and Employment Begum Mannujan Sufian in the conference room at the Secretariat on Monday, said a press release.

Under the amended labour law, profit-earning companies have to contribute one-tenth of the five per cent of their net profit at the end of the year to their participatory welfare funds as well as the government-formed labour welfare fund.

Till date, a total of 200 companies contributed about Tk 5.57 billion to the fund and around 14,000 workers have received approximately Tk 500 million from this fund.