Dhaka derby ends in a draw 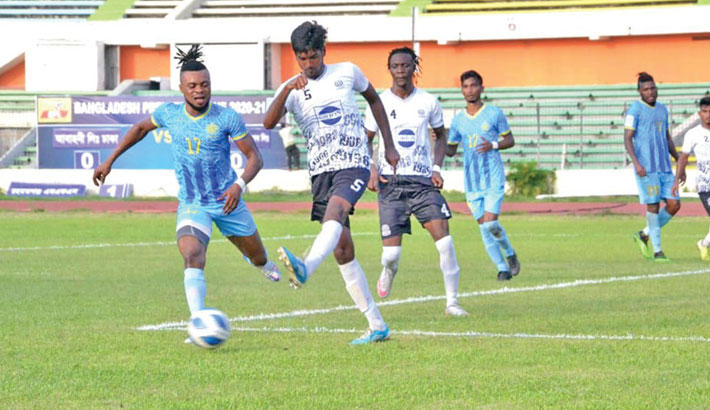 Players of Abahani Ltd Dhaka and Mohammedan Sporting Club Ltd vie for the ball during their Bangladesh Premier League football match at the Bangabandhu National Stadium in the capital on Sunday. —BFF PHOTO

The third Dhaka derby of the ongoing Bangladesh Premier League football between two archrivals Abahani Ltd Dhaka and Mohammedan Sporting Club Ltd ended in a 1-1 draw at the Bangabandhu National Stadium in the capital on Sunday.

Abahani, who appeared on the field without their three key players -- Nabib Newaj Ziban, Sohel Rana and Saad Uddin, came to attack from the beginning of the first half, but their attackers failed to break the opponents’ defence line.

The game became exciting while Mohammedan also came into counter-attacks. The traditional black and white could take a lead in the 20th minute, but forward Yassan hit the side post when Malian forward Souleymane Diabate sent him the ball in the danger zone.

Within 10 minutes, the pair grabbed the success and took the 1-0 lead for Mohammedan. Diabate passed the ball to Yassan inside the box and the Cameroonian made no mistake to find the net correctly in the 30th minute.

After conceding the goal, the Dhanmondi outfit raised their chances for an equaliser. Belfort, who wasted a close chance in the 33rd minute, finally relieved Abahani in the 41st minute. The Haitian forward sent the ball home with a chip shot from inside the box (1-1).

At the beginning of the second half, both teams got involved in a dispute on a decision of a corner, but the referee made peace among the players.

Abahani were desperate to cut the points gap between them and the league leaders Bashundhara Kings, who tried hard to avoid the draw in this half. Though the BPL runners-up produced four close chances but went in vain.

After the draw, Abahani are second in the BPL point table after holders Kings, earned a total of 33 points from 9 wins, 6 draws and a defeat while Mohammedan climbed up fourth with 29 points from 8 wins, 5 draws and 3 defeats.

Earlier, Abahani beat Mohammedan by 3-0 goals in the season’s first derby of Federation Cup last December, but the second derby of premier League first-leg ended in a 2-2 draw in January.