Italy see off Austria to join Denmark in Euro quarters 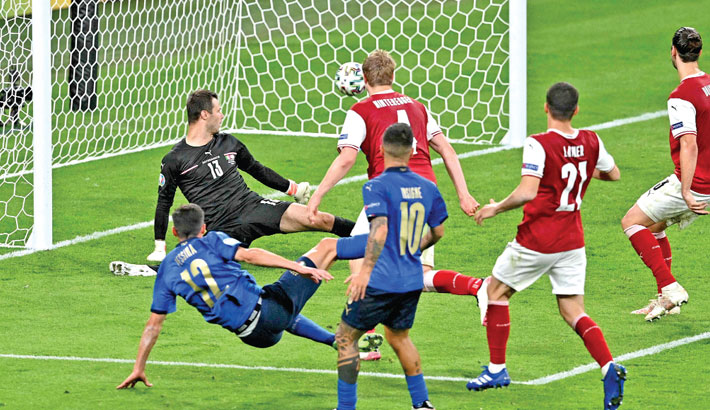 Italy midfielder Matteo Pessina (right) shoots to score the second goal during their UEFA EURO 2020 round of 16 match against Austria at Wembley Stadium in London on Saturday. —AFP PHOTO

Italy overcame stubborn Austria 2-1 in extra-time at Wembley on Saturday to reach the Euro 2020 quarter-finals as Denmark breezed through by hammering Wales 4-0.

Italy's fans gave a rousing rendition of their national anthem and were the more enterprising team in the first half but Austria came back strongly after the break and cursed a VAR decision to rule out a goal for Marko Arnautovic 20 minutes into the second half.

Despite multiple attempts on goal from both sides, they were locked at 0-0 after 90 minutes in London. But Chiesa made the crucial breakthrough five minutes into extra-time and another goal from Pessina gave Italy a two-goal cushion.

There was still time for late drama when Austria's Sasa Kalajdzic pulled a goal back but Italy progress and will play the winners of Sunday's tie between Belgium and holders Portugal.

Earlier, Denmark eased into the quarter-finals with a 4-0 win over Wales in Amsterdam's Johan Cruyff Arena thanks to two goals from Kasper Dolberg's and late goals from Joakim Maehle and Martin Braithwaite.

The Danes, carried by a wave of emotion, are the neutrals' favourites after overcoming the trauma of Christian Eriksen's cardiac arrest in their opening game.

Denmark confirmed a knockout tie at the European Championship for the first time since they stunned the continent by winning the tournament in 1992.

It is exactly 29 years since Denmark defeated Germany in the final in Gothenburg having famously only qualified because war-torn Yugoslavia disintegrated.

Robert Page's side made a promising start as Gareth Bale drilled just wide from distance, but Dolberg curled Denmark ahead with a sumptuous strike shortly before the half hour.

The Nice forward, brought into the team as a replacement for Yussuf Poulsen, then pounced on a poor clearance by Neco Williams to fire home a second just after half-time.

Maehle added a third goal for Denmark two minutes from time before Harry Wilson was sent off for a lazy challenge on the Atalanta player.

Braithwaite rubbed further salt into Welsh wounds with a fourth goal in stoppage time as Denmark became the first team in European Championship history to score four in successive matches.