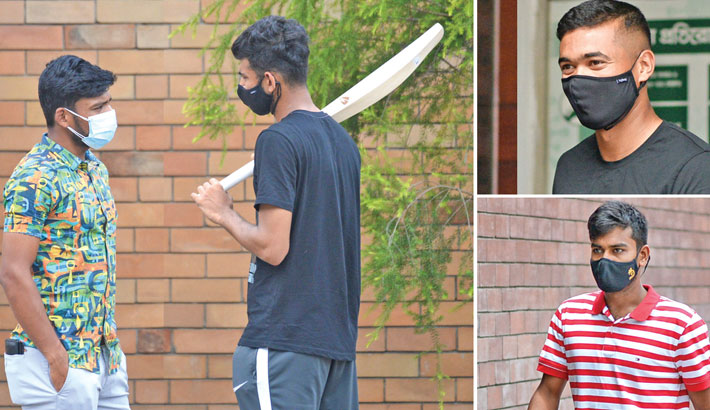 Batsman Nazmul Hossain Shanto (left) talks to spinner Nayeem Hasan during their Covid-19 tests at the BCB headquarters in the capital on Sunday. Pacer Taskin Ahmed and all-rounder Mehidy Hasan Miraz are also seen in the insert. —TANVIN TAMIM

Several members of the Bangladesh contingent for their upcoming full-fledged series against Zimbabwe underwent the Covid-19 test on Sunday as they are taking the last minute preparation before leaving for the African nation.

Liton Das, Najmul Hossain, Mehidy Hasan and Nayeem Hasan amongst Bangladeshi cricketers who gave their samples at the Bangladesh Cricket Board head office in Mirpur.

Opener Sadman Islam and a few members of the support staff, who weren’t vaccinated before, had also taken their respective Covid-19 vaccine on the same day.

Two experienced campaigners - Mushfiqur Rahim and Mahmudullah are yet to take the Covid-19 vaccine, informed a BCB official.

It was also learnt that the foreign coaching staff are also getting prepared to join their charges and they are expected to fly from their respective destinations very soon.

All-rounder Shakib Al Hasan, who is currently in the USA with his family, will join his teammates straight from his current location.

BCB director Ahmed Sazzadul Alam, who replaced Khaled Mahmud as the team leader for the Zimbabwe tour, confirmed that Shakib will join his teammates at Harare as his travel plan has been made this way.

“He (Shakib) will be going straight to South Africa and then probably would join us at Harare as it is stated in the CCDM and BCB arrangements. Our (Test) team will go first and some of the teammates (for ODI and T20I matches) will join us later,” Sazzadul told the reporters.

“We are hoping that Shakib will be playing in all three formats upon his return. Obviously, he is a great player and his name creates pressure on the opposition as well. So up to this point, everything looks fine and let’s see what happens when we reach Zimbabwe,” he added.

Bangladesh Test squad is scheduled to fly on Tuesday morning while other members will join them shortly after for the limited-over series.

Bangladesh are scheduled to play the one-off Test on July 7-11 and ahead of the opening Test, the tourists will play a two-day practice game on July 3 and 4.