Exodus from capital to village homes 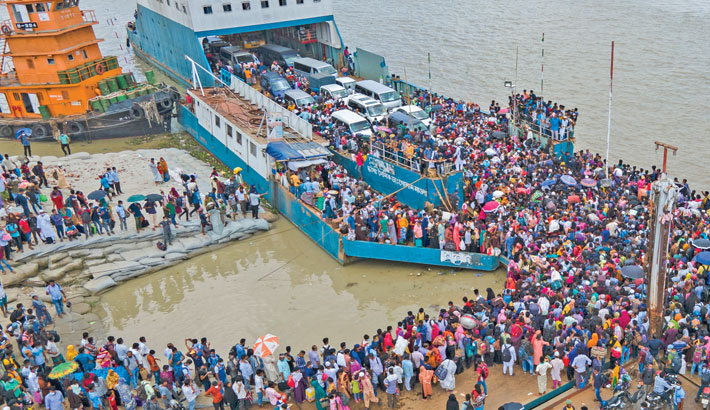 Desperate homebound people are seen scrambling to board a ferry at Shimulia Ghat in Munshiganj on Sunday as Bangladesh enters a lockdown today in an effort to stem the surge in coronavirus infections. —Reaz Ahmed Sumon

City-dwellers in their thousands thronged roads, highways and ferry terminals on Sunday to get vehicles to reach their village homes ahead of a countrywide lockdown.

People have started leaving Dhaka city in droves shortly after the lockdown was announced on Friday to check the spread of the deadly coronavirus.

Because of the suspension of long-distance vehicles, many were found travelling by small vehicles, including cars, microbuses, auto-rickshaws, motorbikes and goods-laden trucks.

“Despite our best efforts, we haven’t been able to reduce pressure of the crowds,” he said.

Alongside the freight trucks and emergency service vehicles, passengers crowded the ferries in violation of health protocols to cross the Padma.

Police checkpoints set up on the road leading to the port are turning away vehicles and trying to dissuade travellers from going to the port, said Mawa traffic police chief Zakir Hossain.

The crowds on Dhaka-Mawa highway are larger than those in the past two days, he said.

Police said they were taking strict measures to enforce the countrywide lockdown effectively.

As speedboats and launches are not available, pressure of passengers on ferries remains high, police said.

Thousands of people have been found travelling on these routes, braving immense sufferings due to the suspension of long-distance buses during the ongoing lockdown in Munshiganj.

The government suspended the services of long-distance buses, trains and launches from the capital on June 23 to stem the surge in Covid-19 infections and deaths.

At the same time, a strict lockdown has been imposed on Narayanganj, Munshiganj, Manikganj, Gazipur, Madaripur, Rajbari and Gopalganj to keep Dhaka free from high risks of the viral disease.

During a visit to different entry-exit points in the capital, many people were seen departing Dhaka with families on Sunday morning as the lockdown might be extended further.

It was also found that people are entering Dhaka from different districts in the country. The home-bound people reached Gabtali by rickshaws or auto-rickshaws. Then, they crossed Gabtoli Bridge on foot. From Aminbazar, they boarded local buses to reach their destinations.

As offices and other business establishments will be closed for lockdown from today, people are leaving Dhaka in droves.

It was found people with heavy luggage were coming to Chondra in Gazipur from Dhaka on Dhaka-Tangail highway whatever vehicles they could avail, especially motorcycles and auto-rickshaws.

From Chondra, they catch goods-laden trucks, pickup vans and motorcycles. Many of them were seen renting private cars in groups.

Many people rent private cars in groups for reaching their destinations in northern districts. Many motorcycles were seen carrying people.

Whenever a vehicle stops at Chondra, people run towards it to reserve seats. And taking the advantage, the drivers charge them extra fares.

The number of motorcycles, auto-rickshaws and auto-rickshaws increased on Dhaka-Aricha, Dhaka-Mawa and Dhaka-Chattogram highways since Saturday morning. All modes of vehicles are also crossing Paturia-Daulatdia river way.

Zillur Rahman, deputy director of the BTWTC, Aricha regional office, said all the 16 ferries have been prepared as people were rushing to the terminal. Ferrying of passengers and vehicles are going on smoothly, he said.