PM seeks co-op from all to fight corona 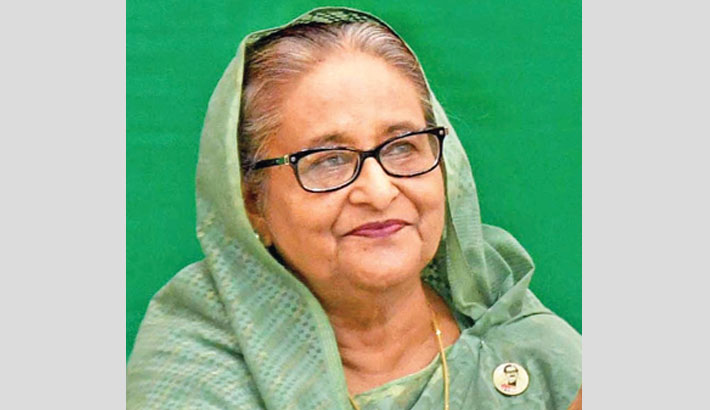 Prime Minister Sheikh Hasina on Sunday sought cooperation from all to effectively fight the second wave of the Coronavirus that increased infection and death rates recently.

“We just want to say that we can be able to face the situation (arising out of the Corinavirus), InshaAllah. We want help from all to this end,”   she said while distributing the “Bangabandhu Jatiya Krishi Purashkar 1424”.

Joining virtually from her official Ganabhaban residence here, the Prime Minister said all have to remain careful as the second wave of the Covid-19 has started increasing the infection and death rates, reports BSS.

She asked all to maintain health guidelines properly to protect themselves and their families from the claws of the virus.

The Prime Minister simultaneously asked all concerned to give importance on building food and agricultural goods processing industries in 100 economic zones that will immensely contribute to the development of agriculture alongside the industry.

“We are setting up 100 economic zones. We want to prioritize building food and agriculture goods processing industries in the economic zones. Because, it will not only help boost industrial development, but also the agricultural one,” she said.

She stressed the need for continued efforts to increase food production as its demand will definitely increase during the Coronavirus period.

In this regard, she said that if Bangladesh can continue increasing its food production, it can help other countries as that food can be exported to other countries by meeting the local demand.

The Premier however asked all to ensure quality of the produced foods such as fruits, vegetables, milk-egg and fish-meat to export those into foreign countries.

Senior Secretary of Agriculture Ministry Md. Mesbahul Islam gave a welcome address and presented credentials of the award recipients while Maya Rani Baul expressed her feelings about getting the award on behalf of the awardees.

On behalf of the Prime Minister, the Agriculture Minister distributed the “Bangabandhu Jatiya Krishi Purashkar 1424” that included five gold medals, nine silver medals and 18 bronze medals among 32 persons and institutes for their contribution to the agriculture.

A video documentary on activities of the Agriculture Ministry was also screened on the occasion.

The Prime Minister also unveiled the covers of an edition comprising one hundred agriculture related comments of Father of the Nation Bangabandhu Sheikh Mujibur Rahman titled “Bani Chirosobuj” published by the Agriculture Ministry and a memorial book “Chironjib” at the function.

Briefly spelling out various measures taken by her government, Sheikh Hasina said that they have been able to maintain economic growth amid the coronavirus pandemic.

The Prime Minister said that they have given 23 stimulus packages worth about Taka 1,28,0441 crore and gave assistance in various forms to over five crore people during the pandemic mainly to keep moving their lives and livelihoods.

She said that the Awami League government is the government which always gives the highest honour to the farmers, following footsteps of the Father of the Nation as he had taken measures giving priority to agriculture and farmers, as agriculture is currently contributing most to make the country self-dependent economically.

The Prime Minister said they do not even deprive the sharecroppers as they are giving them loans without any collateral as the government’s topmost priority is to engage them in food production with full strength.

Since assuming office in 1996, the AL government has been attaching the highest priority in agriculture and research that helped Bangladesh for the first time to be self-reliant in food production in only fives and the FAO (Food and Agriculture Organisation) of the United Nations awarded Bangladesh for its remarkable achievements in agriculture within a short period of time in 1999.

The Prime Minister said that her government is currently working in six thematic areas of agriculture for attaining sufficiency in agriculture, food security and nutrition.

Sheikh Hasina requested all to maintain the standard of foods to include those in the export list for what she said the government has taken initiatives to comply with the rules and regulations for exporting food and agricultural items abroad.

The premier said to pursue the move, her government has established a phytosanitary in Shyampur which is playing an important role in maintaining standard for export agricultural items.

The country has achieved the developing country status due to various measures taken by the government, she said and called upon all to maintain this status in future to become a developed and prosperous country as envisioned by the Father of the Nation.