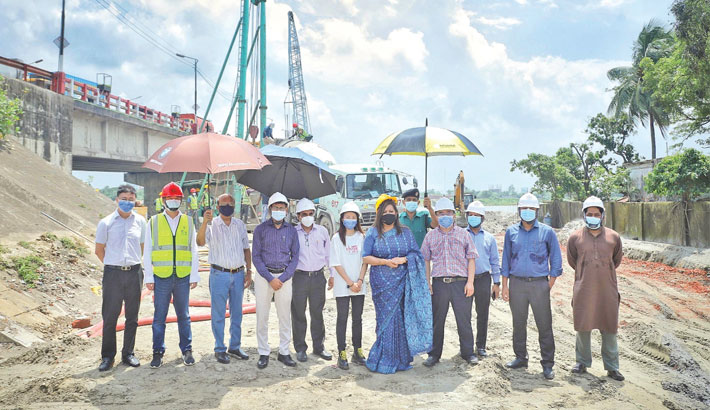 The work of upgradation of Dhaka Bypass Road into a four-lane access-control expressway is progressing.

The project is the first-ever the Public-Private Partnership project of the Roads and Highways Department.

She along with other officials visited the various sites of the project, including the construction work of the largest Kanchan Bridge.

After the visit, Sultana Afroz expressed her satisfaction over the quality of the work.

She hoped that the current quality and standard of the work would be maintained until the completion of the project. Afroz said the PPPA was working to materialize Prime Minister Sheikh Hasina’s national development goals.

The project is expected to reduce traffic congestion inside Dhaka city establishing a road connectivity with safe and modern facilities. This is also expected to play a significant role in boosting the overall trade and commerce of the country.

Consortium Dhaka Bypass Expressway Development Company is carrying out the construction work now after facing hurdles created by the pandemic.

On 22 June, 2021, the revised support of Tk 84.64 crore for the project was approved by the Executive Committee of the National Economic Council (ECNEC).

The money will be spent mainly on land acquisition, rehabilitation, and consultancy, sources related with project said.

The construction timeline of the expressway project is three years. The project is now in the Condition Precedent stage.  The consortium announced that the financial closure will be completed by August.

The project, built entirely with private funding, will be managed and operated by a private partner with a 25-year contract.

During the visit, the PPPA CEO was accompanied by PPPA director general Abul Bashar and director Anwar Hossain.

Project Director, representatives from the Roads and Highways Department and private partners were also present.