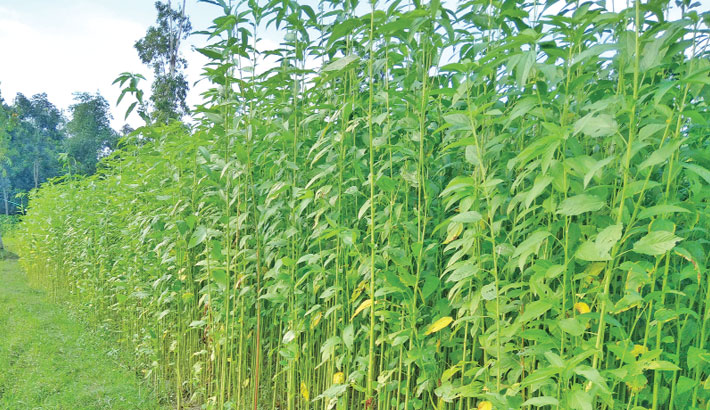 RAJSHAHI: Jute cultivation has exceeded target this season as interest among the growers to the cash crop farming is seen increasing everywhere in Rajshahi division including its vast Barind tract.

According to the sources concerned, farmers are humming towards the jute farming as they are getting lucrative prices for its produce during the last couple of years giving a message of getting back to the golden era of the cash crop in near future, reports BSS.

Siddiqur Rahman, a resident of Debipur village under Durgapur upazila, has cultivated jute on two bighas of land, saying the frequent rainfall is benefiting the growing plants at present.

Apart from this, he will get jute sticks worth around 5,000 from the farming.

They had sold jute at Taka 2,000 per mound during the previous year’s harvesting time but its price increased gradually. Finally, they sold the jute fiber at Taka 4,500 to 5,000 per mound according to quality.

Meanwhile, the Department of Agriculture Extension (DAE) has set a target of producing around 2.62 lakh tonnes of jute from 1.25 lakh hectares of land in all eight districts in Rajshahi division during the current season. Bet, the farmers have brought 1.29 lakh hectares under the jute farming creating scopes of additional production.

Officials and farmers are very much hopeful about harvesting better jute yield in the country’s northwest region this season.

Currently, the farmers are seen nurturing their jute fields as they were also seen showing interest in cultivating jute after getting its repeated bumper production and lucrative market price.

Sirajul Islam, additional director of the DAE, said farmers got fair prices of jute during the last couple of years and as a result, they are now eager to cultivate more jute.

“Around 10 to 12 years back, the farmers lost interest in jute cultivation as they did not get fair prices,” said the official.

The current market price of jute has made the farmers happy because they never thought about the unprecedented price of the cash crop in the region.

Imran Ali, 54, a farmer of Borgachhi village under Paba upazila, said jute fiber is being sold at Taka 5,200 to 6,000 per mound at different hat and bazaars in the region.

So, farmers are very much happy after getting excellent yield and price, he added.

Ali had cultivated jute on seven bighas of land and attained good yield because of suitable climate conditions and sold most of his produced jute initially in fear of price declining.

But, currently, the price has tripled compared to the initial price. None have thought about the present soaring price, he said.

Marjidul Sarker, a farmer of Yusufpur village under Charghat upazila, said he had cultivated jute on two bighas of land and sold his harvested jute at Taka 5,200 to Taka 5,500 per mound on an average.

Mokbul Hossain, another farmer of Khorda Gobindapur village, is now happy as he reaped a better price of his cash crop than the previous time.

Alamgir Hossain of Aloknagar village under Bagmara upazila has gained profit as he got good jute yield from his farm field and expected market price.

Jute trader Saidur Rahman at Naohata Bazar said jute was sold at Taka 1,400 to 2,000 per mound in the previous seasons.

He said the price may further rise, mentioning that the price has hiked because of escalating demand of jute fiber in both domestic and global markets.

This year, he’s seeing the highest rate of jute.

Referring to the official records, he said jute worth over 2.34 crore US Dollar has been exported from Rajshahi in 2019-2020 fiscal year.

Increased farming of jute could revive the past glory of the golden fibre ushering a new era in the economy as well as saving the environment and soil health from further degradation.