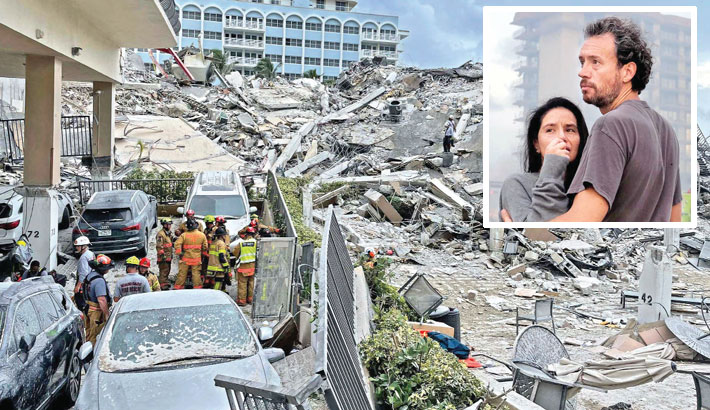 WASHINGTON: Florida Governor Ron DeSantis has said people “have a right to know” how a 12-storey building collapsed in the US city of Miami, as the search for survivors continues, reports BBC.

The number of people listed as missing remains at 159, officials say, with four people known to have died. At least 102 people have now been accounted for, but it is uncertain how many were inside when it came down.

Questions are now growing about what caused the building to collapse.

Speaking on Friday, Governor DeSantis said the focus remained on finding survivors. But he called for a “timely” explanation for what happened, adding they needed to know “if this is a bigger issue, or something unique to the building”.

Champlain Towers South was completed in 1981. When it collapsed it was going through a recertification process for 40-year-old buildings, in line with city safety regulations. Miami-Dade County Mayor Daniella Levine Cava said at a press conference on Friday night she was hopeful they would find survivors overnight.

“We have hope because that’s what our search and rescue team tells us, that they have hope,” she told reporters.

Rescuers are working in rotation with a limited number allowed on site at any one time to prevent any further collapse, she said. Teams from Mexico and Israel have also reportedly arrived to help with the search.

As night fell on Friday, the fire rescue service warned people nearby to stay indoors due to the “smoky conditions”.

A large section of the oceanfront Champlain Towers in Surfside crumbled to the ground at about 01:00 (05:00 GMT) on Thursday.

Resident Barry Cohen was in bed when the building started to collapse. “It sounded like thunder, and my wife and I, we went out on the balcony; it looked like a bomb had exploded,” he told the BBC.

“When we opened the door, there was no building there, it was just a pile of rubble,” he said.

Eyewitnesses described hearing what sounded like thunder before seeing a huge cloud of dust in the aftermath of the collapse. One compared the scene to the 11 September 2001 attacks on the Twin Towers in New York.

Authorities have begun taking DNA samples from relatives of those missing in case only remains of their family members are found in the rubble.

Relatives of the missing have been putting out appeals on social media for information that could help them find their loved ones.

A full investigation will begin after the rescue mission.

As the building had stood since 1980, it was due its standard 40-year review. The building was undergoing its “recertification” process and required repairs, officials said.

Kenneth Direktor, a lawyer involved in the work, was quoted in the New York Times as saying engineers had identified rusted steel and damaged concrete that needed repairing, but added that he had seen nothing to suggest the collapse had anything to do with that review.

A study from researchers at Florida International University published last year found that the building had been sinking at a rate of two millimetres per year in the 1990s, which may have affected the building structurally.

But the author has cautioned that the study was just a snapshot in time. The building was constructed on reclaimed wetland, which experts say is always of concern as the land underneath can compact over time, leading to shifts.

On the sinking, the author of the study, Prof Shimon Wdowinski, told the Miami Herald newspaper: “We’ve seen much higher than that, but it stood out because most of the area was stable and showed no subsidence.”

Prof Wdowinski said the research is not meant to suggest certainty about the latest incident.