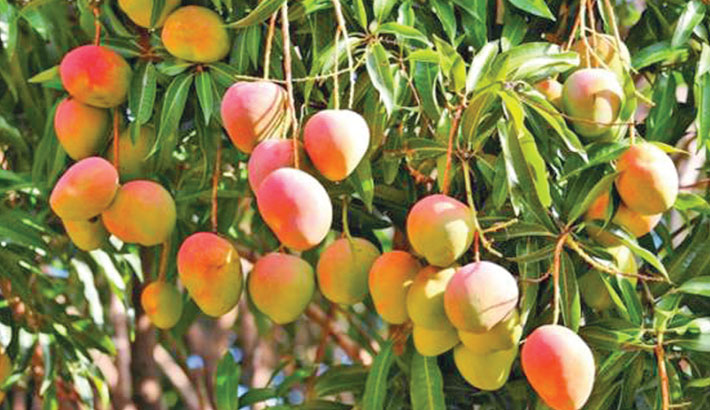 Despite huge potentials, mango export from the country is not rising in proportion to the increase in production in recent years.

Demand for Bangladeshi mango is high in the global market, but most of local producers can’t comply with phytosanitary requirement of many countries.

But it slipped to 207 tonnes in FY 2019-20 due to corona impacts, informed Mohammad Mozibul Hoque, senior manager of supply chain and business development specialist of Solidaridad Network Asia.

So far, some 300 tonnes of mango has already been exported this year, he also informed. “Mango production is increasing by 7-8 percent in recent year.  Last year the production was around 24 lakh tonnes. If we can export 5-10 percent of the total production, it will be a good prospect for farmers,” Mohammad Mozibul Hoque said.

In recent years, the juicy fruit production surged a lot thanks to the support of Year-Round Fruit Production for Nutrition Improvement project in Bangladesh.

Mehedi Masood, director of a project of Year-Round Fruit Production for Nutrition Improvement under Department of Agricultural Extension (DAE), told the Daily Sun that fruit production has increased manifold in the country in the last 10 years.

“Now we have to increase export of mango as an opportunity created by huge production,” he said.

The Himsagar, Gopalbhog, Langra, Fazli varieties from Rajshahi, and Chapainawabganj were the main source of mangoes once.

But Amropali mango, which has been modified a decade ago, has cleared the way for cultivating mangoes across the country.

According to the Food and Agriculture Organisation (FAO) of the UN, Bangladesh marks the highest rate of growth in fruit production among the world's fruit producing countries. Supposedly it is the tenth largest tropical fruit producer currently.