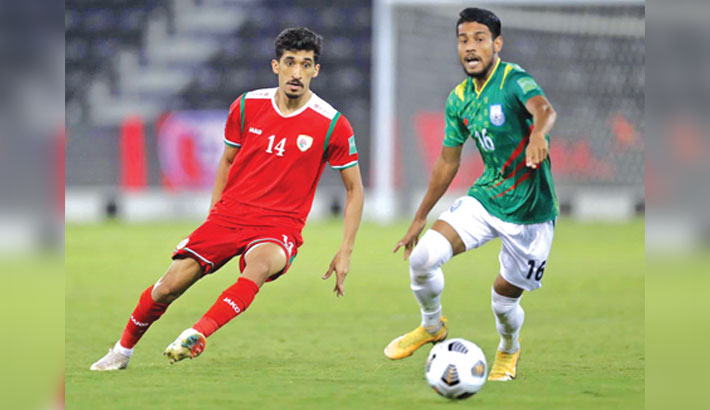 There are several examples in football history where the weaker side with less ball possession has held their strong opponents even outclassing them despite not able to dominate the midfield in the match.

Bangladesh played three matches (one draw, two defeats) this month to finish their campaign in the joint qualifiers round two for FIFA World Cup 2022 and AFC Asian Cup 2023.

During these matches, Bangladesh’s ball possessions were 27, 26 and 21 percent respectively against their three opponents -- Afghanistan, India and Oman.

These numbers cleared revealed that Bangladesh team’s problem was not only their forwards who failed immensely during the qualifying matches but also their midfielders who failed to control the ball for a long time on the pitch against their opponents.

Defender Topu Barman, who led the team against Oman in absence of regular skipper Jamal Bhuyan in their last group match, identified the lack of long ball passes, lack of quick passes and speedy pitch behind the reasons for their midfield failure.

“We failed to possess the ball in the midfield. Their ball possessions were better than us. It’s very hard to run on the pitch for a long time without the ball. It created fatigue and disappointment,” Topu told The Daily Sun.

“Our midfield tried hard but they were not as speedy as our opponents. We failed to pass the ball quickly. Also, the opponent team’s players chased us quickly and forced us to play the wrong passes.

“We have to remember also one thing, Qatar pitches are very speedy. If we had played these matches at home, the result would be different. However, we have to individually improve on long ball passes, quick passes to solve midfield problems,” the veteran defender added.

In their last match against Oman, the men in red and green could make only 180 passes against their opponents’ 698.

Midfielder Biplo Ahmed said they couldn’t have a decent number of ball possession because of not having regular players in the midfield due to various reasons.

“There were some problems in the midfield. Sohel (Rana) bhai got injured (before the India match) and it made our midfield a little bit weak. Then against Oman, our four players failed to play which was a big disadvantage for our side,” the midfielder added.

Another midfielder Masuk Mia Zoni, who missed the Oman match due to injury, lamented for not playing enough practice matches before the qualifying matches.

“They played practice matches against various countries while we just played against a club team. I think it puts them ahead of us,” Zoni said.