A tale of haunted temples 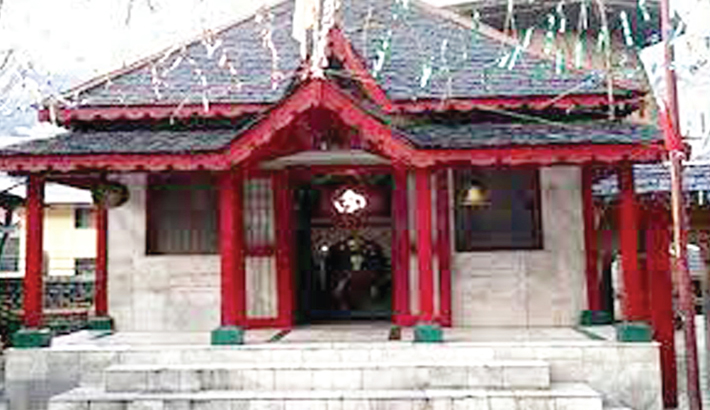 Large or little, modern or mediaeval, there are thousands of temples in the world. Millions of people visit these temples either for acquiring virtue or for finding out the historical background or to view the architectural design or just for touring. Every temple has its own history and characteristic. Almost every temple is dedicated to a particular god or goddess. Such a temple located at Vermore, Chamba district, Himachal Pradesh, India, 500 km from New Delhi, contains a different specialty, but what is it? Before going to it we need to find out answer to an important question. Where is our place after death? For believers the answer is very simple – hell or heaven. Then the question comes – who will decide it and how? The answer is - Yamraj and here lies the distinct character of this temple because this 1400-year old temple is considered to be the only temple of Yamraj in the world.

According to Hindu belief Yam is the god of death and justice also. Vedic doctrine says that Yam was the first mortal in the animal kingdom who died and ascended to heaven. As a reward of this primacy, Lord Shiv made him the god of death. It is said that Yamraj decides the place of the soul of a dead person in afterlife - heaven or hell. As such, after death, everyone has to appear before Yamraj. Question naturally arises, where does that meeting take place? Believers say that the meeting is held in The Yamraj Temple. As the other name of Yam is Dharmaraj (King of Justice) this temple is also known as Dharmeshwar Mahadev Temple. Sitting in his private chamber inside this temple Yamraj himself meets the dead souls. In fact, it is not just a meeting but a trial of dead souls on the basis of their deeds when they were alive. This is the place of their last judgment and according to their karma (deeds in lifetime) Yamraj decides where the soul will go - heaven or hell. Residents here believe that Yamraj is not alone, Chitragupta is also with him in a separate room of this temple.

According to scriptures, Chitragupta is a Hindu junior god assigned with the task of maintaining detailed record of all actions of human beings. As per dictionary of Bangla Academy, Chitragupta is a clerk of Yamraj. However, he may be called the chief accountant of Yamraj. There are many temples dedicated to Chitragupta. Notable among those are - Chitragupta temples at Khajuraho, Madhyapradesh, Kanchipuram, Tamilnadu and also one in Thailand. Chitragupta Temple at Kanchipuram is the oldest temple in South India. On the basis of inscriptions, archaeologists have confirmed that the temple was built during the ninth century by the Medieval Cholas. Sitting in his room round the clock he maintains a detailed record of all sins and virtues of human beings during their lifetime. After death, the souls are first presented to Chitragupta by the messenger of Yamraj.

Chitragupta producess all records to Yamraj and trial is held on that basis. Analysing their karma (deed) in this world Yamraj passes his verdict. After hearing the verdict messenger comes and takes the soul to heaven or hell as decided by Yamraj. There is no way to escape. It is believed that there are four invisible doors around this temple (house of Yamraj) made of gold, silver, copper and iron. Messengers of Yamraj take the souls through these doors according to the verdict of Yamraj. The temple is believed to be guarded by two four-eyed pet dogs of Yamraj.

There are so many myths about this temple of Yamraj and they are so thrilling that most of the people do not even dare to enter into the temple. From outside devotees raise their joint hands upto forehead and bow down to respect the deity. It is said that once someone entered into this cell but he did not come out alive. Some had dared to enter but their dead bodies were found the next day.

This is the local belief about this Yamraj temple. Certainly these stories are neither scientifically proved nor logically supported. Fans’ beliefs and scientific explanations never match together and it is never possible. Despite conflict between faith and disbelief this temple of Yamraj has become a special attraction for the devotees. Simultaneously, this temple is also a special favourite among tourists because of its age, location, spiritual gravity and structural beauty.

Another such temple is Sarada Devi (not wife of Ramkishnadev) Temple in Maihar, Madhyapradesh, India. Maihar is actually a combination of two words – Mai (mother in HIndi) and har (necklace in Hindi and also Bengali). Around 1,063 stairs are to be crossed to reach this hilltop temple. There is a ropeway upto the top for disabled and aged persons, but others normally prefer and enjoy climbing stairs. Tourists and devotees flock to this temple throughout the year which increases during Navratri. A statue of Goddess Sarada (Sati, wife of Lord Shiv) is found in the sanctum sanctorum of the temple. The statue is believed to have been erected in the sixth century. There are many temples in India, but what is the specialty of this temple? According to a peculiar local belief, the spirits of dead warriors come back to this temple. A 900 year-old soul still comes every morning to worship here.

Root of this legend lies 900 years ago, the time of Prithwiraj Chauhan. When Prithwiraj invaded this region (formerly known as Bendhelkhand) two warriors named Alha and Udal resisted him. Alha was an absolute devotee of Goddess Sarada. Rewarding his heroism, the goddess bestowed immortality on Alha. According to traditional belief, immortal Alha still comes to the temple every morning and worships the goddess. Even if the temple doors are closed there is no obstacle to his arrival. He cannot be seen but every morning, after opening the door, fresh flowers and garlands of his worship are found lying at the feet of the goddess. Alha’s story may or may not be true but it matters little to devotees particularly when it is known that this temple is actually one of the 51 peeths (holy seats, shrines) of Sati.