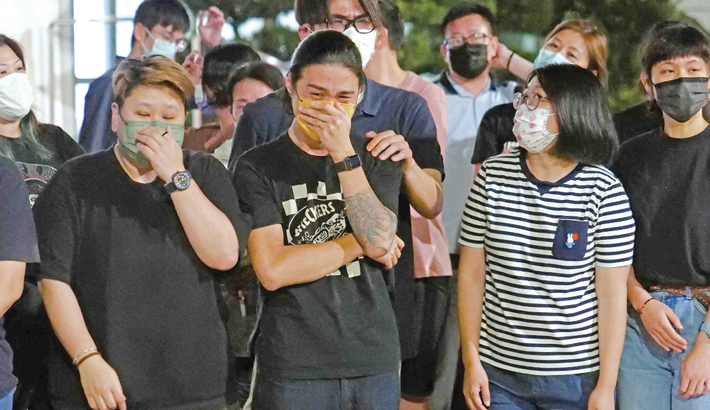 Apple Daily journalists get emotional after thanking supporters gathered outside their office in Hong Kong early on Thursday, as the pro-democracy tabloid was forced to close after 26 years under a sweeping new national security law. - AFP PHOTO

HONG KONG: Thousands across Hong Kong rushed to snap up the final edition of the pro-democracy newspaper Apple Daily, which closed its doors after 26 years, reports BBC.

Overnight, hundreds braved heavy rain, gathering outside its offices where a million copies were being printed.

The publication decided to shut down after its reports were accused of breaching a national security law, leading to a freeze on company assets.

The closure is seen as a blow to press freedom under the pressure of Beijing.

In the early hours of the morning, news stands across the city saw long snaking queues with people eagerly hoping to pick up the very last copy of the paper. By 10:00 local time, multiple vendors had sold out, according to social media posts.

The final edition was a tribute to its readers with the headline: “Hong Kongers bid a painful farewell in the rain”.

“I think it’s the end of an era,” supporter San Tsang told news agency Reuters as she was waiting in line. “I don’t understand why [Hong Kong] can’t even tolerate a newspaper.” “I want to support it till the end,” Amma Yeung said. “The newspaper has accompanied society for so many years. After this, we will weather the storm.”

On Wednesday night, just hours after the company announced its closure, supporters of the tabloid had gathered outside its office, even as heavy rain fell.

They lit their phone flashlights as a show of solidarity and shouted support slogans like “add oil” - a popular phrase of encouragement in Hong Kong, which can sometimes be translated to mean “go for it” or “don’t give up”.

In response, Apple Daily staff ducked out of their offices to stand at balconies and windows, waving flashlights and shouting “Thank you Hong Kong” to the crowds outside. Some were seen handing out free copies of the final copy to the supporters on the street.

Reports from within the newsroom on its very last days showed emotional scenes of defiant applause as well as tears and confusion.

Apple Daily was Hong Kong’s largest pro-democracy paper and had been a thorn in the side of Beijing’s attempts to stamp out dissent.

The paper’s offices were raided by police last week over allegations that several reports had breached a new national security law which makes undermining the government a criminal offence.

Officials said the paper had published some 30 articles calling on countries to impose sanctions on Hong Kong and mainland China since 2019.

As a result, company-linked assets were frozen and several senior staff were arrested. The paper’s founder Jimmy Lai is already in detention facing charges under the security law.

On Wednesday afternoon, the paper announced it was shutting down. Its online outlet also stopped publishing at midnight on Wednesday. For its final edition on Thursday, Apple Daily printed one million copies, more than 10 times its usual print run.

Ronson Chan, head of the Hong Kong Journalists’ Association, said there was “a huge worry for the city’s freedom of speech”.

“We will be very worried if there are consequences for writing an article. I’m afraid that it will make society feel, or how I feel now, that people can be put in prison because of what they write.”

Hong Kong authorities have dismissed accusations that they’re stifling press freedom, saying they had not forced the paper to shut down.

Chinese officials from Beijing have repeatedly said media freedoms in Hong Kong are respected, but are not absolute.

China introduced the national security law in Hong Kong last year in response to massive pro-democracy protests that swept through the administrative region over the past years.

The law essentially reduced Hong Kong’s judicial autonomy and made it easier to punish demonstrators and activists. It criminalises secession, subversion and collusion with foreign forces with the maximum sentence being life in prison.

A former British colony, Hong Kong was handed back to China in 1997 but with an agreement that certain rights and freedoms should be safeguarded. Critics say the law has fundamentally undermined that agreement.

Since the law was enacted in June 2020, more than 100 people have been arrested under its provisions.