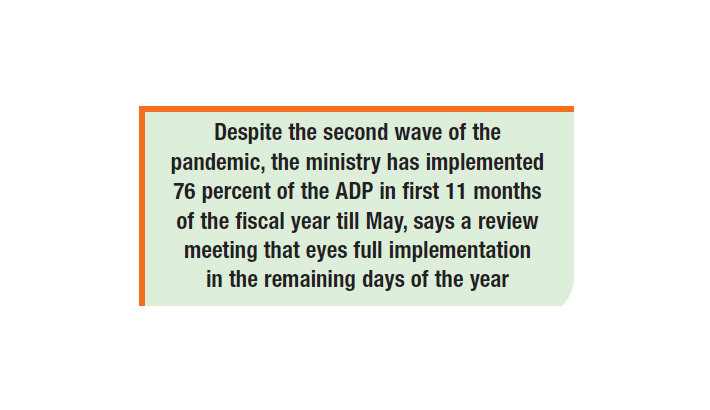 Ministry of Agriculture has achieved 17 percent growth in implementation of Annual Development Programmes (ADP) till May compared to the same period a year ago.

Despite the second wave of the pandemic, the ministry has implemented 76 percent of the ADP in first 11 months of the fiscal year till May.

The progress is 18 percent higher than the national average, said a meeting held to review the progress of ADP implementation at the ministry’s conference room in Dhaka on Thursday.

The national average progress in ADP implementation is 58 percent during the period.

The ministry expects to achieve about 100 percent implementation in the remaining one month.

As of May last year, the ADP implementation progress rate was 59 percent. In the FY2019-20, the total allocation was Tk 17.63 billion and out of the amount, Tk 10.42 billion was spent during the period, the ministry said.

Agriculture minister said the ministry has been successful in ADP implementation by tackling the challenges that included natural calamities like floods and the ongoing pandemic.

The minister directed the ministry officials concerned to expand the salinity-tolerant rice variety to the saline lands in the country’s southern region.

Dr. Razzaque said many salinity-tolerant varieties of rice including BRRI Dhan 67, BRRI Dhan 97, BRRI Dhan 99 and BINA-10 have already been developed. “But adequate seeds of these should be produced and delivered to the farmers,” he said.

He said, “More new varieties and technologies need to be developed to sustain food production and productivity.”

This year the three recipients are from the Ministry of Agriculture and departments or agencies under the ministry.