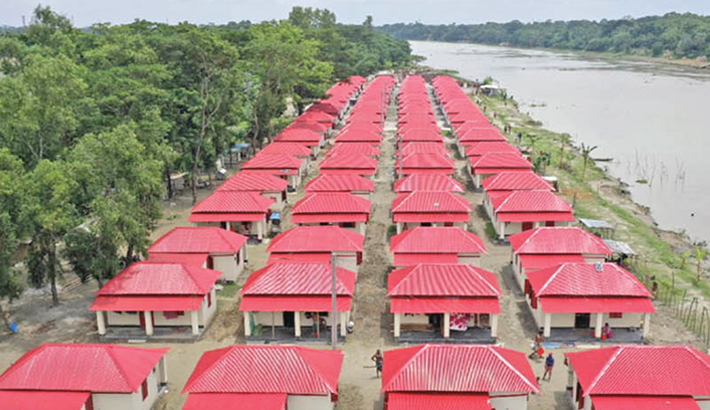 Food, shelter and clothing are basic needs to sustain a human life. But many people living below the poverty line in under-developed and developing countries are devoid of these basic needs, especially shelter.

In the last 12 years, Bangladesh witnessed a huge uplift in socio-economic indexes with reduction of poverty rate to a remarkable extent, reports BSS.

People throughout the country, including the remote areas, are enjoying the benefits of the development and progress while thousands of homeless and landless people are getting permanent homes of their own as a part of the government’s pledge of not letting anyone remain homeless in the country.

Das, a CNG-run auto-rickshaw driver, had to lead a miserable life along with other family members, including his old mother, after losing his home for the second time in 2017.

He used to stay at the residences of his poor relatives for some days. But the relatives were also unable to afford that for long. Later, he along with his family started living in open sky on footpath in Chattogram city.

“I lost my home two times within a decade in erosion of river Karnaphuli. Later, I didn’t have any home of my own. I led a very miserable life along with my wife Pinki Das and my old mother,” Asu Das told BSS while sharing his bitter experience of life.

He said: “A few years ago, I started to drive CNG, but the income is not enough for maintaining all expenses, including house rent.”

Now, the government’s Ashrayan Project appeared as “god from the machine” for Asu Das as he got a two-room semi- pucca tin-shed house of his own on two decimal lands like thousands of other homeless people. Through this, a dream came true for Das and his family members.

Asu Das used live from hand to mouth and he could never imagine that he would have his own house with water and electricity facilities.

As part of the government’s campaign to bring all landless and homeless families under housing facility, Prime Minister Sheikh Hasina handed over 53,340 houses under the second phase of Ashrayan 2 project on June 20.

Elderly Dulal, a physically challenged rickshaw puller of the Brahmanbaria sadar upazila, had also been leading a distressful life along with five other family members at a rented house at Brahmanbaria town.

Though he lost his right hand at the age of seven, he was fighting against poverty thumping his disabilities. But he couldn’t earn enough for bringing smile on faces of his family members due to his limitations.

“I am working as a rickshaw puller instead of begging. But the income is not enough for my family. Moreover, I didn’t have any home of my own. I led a very miserable life along with my wife and four sons,” Dulal told BSS.

Like Asu Das, Dulal also got a house in the village of Jangal under Sultanpur union in Brahmanbaria district.

Ashrayan-2 Project Director Md Mahbub Hossain said the government prepared a list of 885,622 families in 2020, of which 293,361 families are landless and homeless and 592,261 families have 1-10 decimal land but no housing facility.

Besides, 100,000 more houses will be given by December next as part of the government’s move to rehabilitate the country’s homeless people.

Each family is getting the property worth Taka 2.6 lakh, if the value of two-decimal land is on an average Taka 50,000. The construction cost of every house is nearly Taka 2 lakh, while the cost of utility connectivity (electricity and gas) is Taka 10,000.

Under the scheme, joint ownership of two-decimal land alongside a modern abode is being given to both husband and wife of each family.