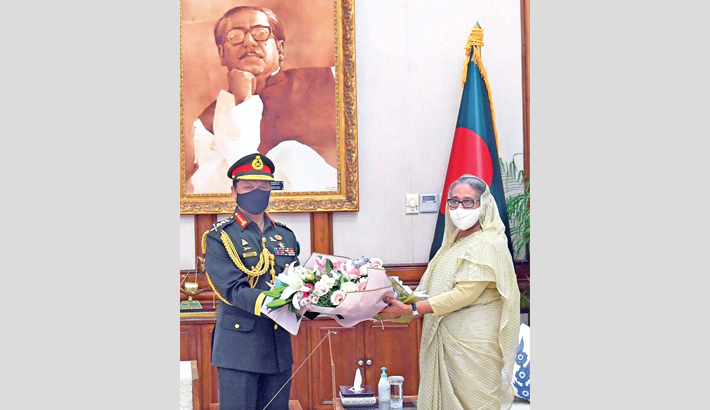 Newly-appointed Army Chief General SM Shafiuddin Ahmed on Thursday took the charge of Bangladesh Army for the next three years.

Outgoing Army Chief General Aziz Ahmed handed over the charge to General SM Shafiuddin Ahmed at the Army Headquarters at a simple ceremony.

After taking the charge, General SM Shafiuddin Ahmed placed floral a wreath at Shikha Anirban (the eternal flame) and paid tribute to the martyrs of the country’s war of independence.

He was then given a guard of honour by a smart army contingent at Senakunja and he planted a sapling there.

Earlier in the morning, Chief of Army Staff General SM Shafiuddin Ahmed was adorned with the new rank badge of General in presence of Prime Minister Sheikh Hasina at Ganabhaban in the capital.

adorned the Army Chief with the rank badge of General.

General SM Shafiuddin Ahmed was born on December 1, 1963 into an aristocratic Muslim family in Khulna district. His father, Professor Sheikh Mohammad Rokon Uddin Ahmed, a heroic freedom fighter, served as a people’s representative for two decades in the pre-independence period.

After the commission, he started his military career by joining the East Bengal Regiment in the operation area in Chattogram Hill Tracts. He holds a bachelor’s degree from the Defense Services Command and Staff College as well as a Masters in Defense Studies from the National University and an MPhil with outstanding results from Bangladesh University of Professionals (BUP) in Development and Security Studies department. He is currently studying for a PhD under BUP. General Shafiuddin Ahmed received an MBA degree from Dhaka University and MIST Gold Medal.

He successfully completed the Defense and Strategic Studies course from the National Defense University (NDU) of China in 2010 and the Army Staff course from the Defense Services Command and Staff College in Mirpur. He also graduated from NDU, Washington.

In his colorful career, he served as General Officer Commanding (GOC) of Army Training and Doctrine Command. He commanded the only logistics formation and 19th Infantry Division of the Bangladesh Army.

He also served as the Director General of Bangladesh Institute of International Studies (BIIS).

General Shafiuddin, as a Pioneer Deputy Force Commander of the Bangladesh Army, led the United Nations Multidimensional Integrated Stabilization Mission in the Central African Republic (MINUSCA) from 2014 to 2016 and received citations by SRSG for outstanding performance.