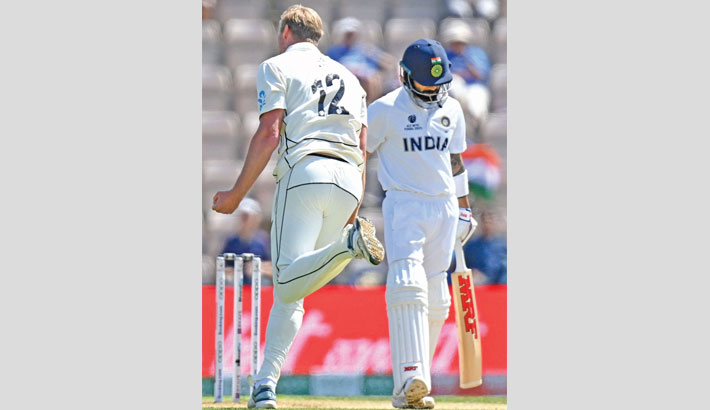 New Zealand were set a target of just 139 in 53 overs to win the inaugural World Test Championship final against India at Southampton on Wednesday.

The Blackcaps bowled out India for just 170 in their second innings, with the match extended into Wednesday's reserve sixth day after two days were washed out completely.

Tim Southee took wickets at both ends of the innings on his way to 4-48 in 19 overs, with Rishabh Pant (41) the only India batsman to manage a score above 30.

Towering paceman Kyle Jamieson followed his first-innings 5-31 by capturing the prize wicket of India captain Virat Kohli for the second time in the match on his way to a miserly 2-30 in 24 overs.

New Zealand, following their agonising Super Over loss to England in the 2019 50-over World Cup final at Lord's, were now in sight of victory in a showpiece International Cricket Council match, with Kane Williamson's men needing a run-rate of under three an over.

This final marks the culmination of a two-year cycle of series to determine Test cricket's first official world champions.