Stand by people as vanguards 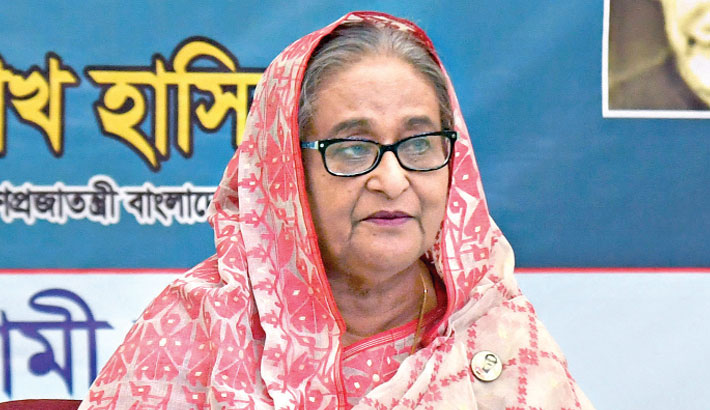 Prime Minister and Awami League President Sheikh Hasina on Wednesday asked her party men to remain always beside the countrymen as vanguards so that none could play ducks and drakes with their fate anymore, report agencies.

Presiding over virtually a discussion from her official Ganabhaban residence in the capital, marking the 72nd founding anniversary of the ruling the AL, the Prime Minister called upon the AL leaders and activists to work in such a way that they can change the fate of the countrymen.

Describing the AL as one of the oldest parties in the sub-continent as it has stepped into 72 years, she said that this is the party which can build the Golden Bangladesh as dreamt by Father of the Nation Bangabandhu Sheikh Mujibur Rahman.

Mentioning that the people of the country are getting food, clothing, accommodation, education and treatment as the AL is in power, she said, “They (countrymen) will again be deprived of rights if AL is no longer in power.”

Taking a swipe at those who are criticising the government over its Covid-19 vaccine management, the premier urged them to have patience and see what the government can do to ensure vaccines for all.

“I would like to tell those who criticise [the govt] to have patience and see what we can do. Why do you criticise?” she said, adding that the government will ensure vaccines for all.

“We’re taking effective measures so that everybody gets vaccines. We’ll do that,” Hasina said.

She said they started contacting every country where vaccine development was at the research level. “Many countries in the world could not go for vaccination yet, but Bangladesh started the inoculation drive collecting vaccines.” She said India banned vaccine export following the massive transmission of coronavirus there. Though Bangladesh fell in trouble to some extent due to the export ban, it later started procuring vaccines from other sources, she said.

“I get stunned when I see those who were given two doses of vaccines on priority basis now criticise us,” said the Prime Minister.

She asked the critics to try to understand the global situation over the vaccine issue. “Bangladesh earlier procured the vaccine at 4 US dollars…now it’s 15 US dollars. The price will go up further in the days to come.”

Hasina said the government has worked out plans so that the vaccines can be produced locally by setting up a vaccine institute here to conduct research in this regard. “We’ll take the measures necessary to develop vaccines in the future by setting up this institute,” she said.

Noting that the second wave of Covid-19 pandemic is badly transmitted throughout the country and many places across the world, she urged the people of the country to follow the lockdown and health protocols even after getting vaccinated.

“You all will have to follow the lockdown restrictions that we’ve enforced. All will have to stay home. If we stay home, wear face-masks, wash hands regularly and remain alert, then we can overcome this situation,” she said.

In the beginning of the discussion, Hasina, the longest serving president of AL as she has been in the helm of the party since 1981, unveiled the cover of a memorial book titled “Sheikh Hasinar Netritter Char Dashak: Sangrami Neta Theke Kaljoyee Rastronayok” (Four Decades of Sheikh Hasina’s Leadership: From a Struggling Leader to a Time-tested Statesman).

Bangladesh Awami League had been formed on this day in 1949 at “Rose Garden” on KM Das Lane in Dhaka, which later transformed into the biggest political party of the country to lead struggles of freedom, the War of Liberation and all other democratic movements.