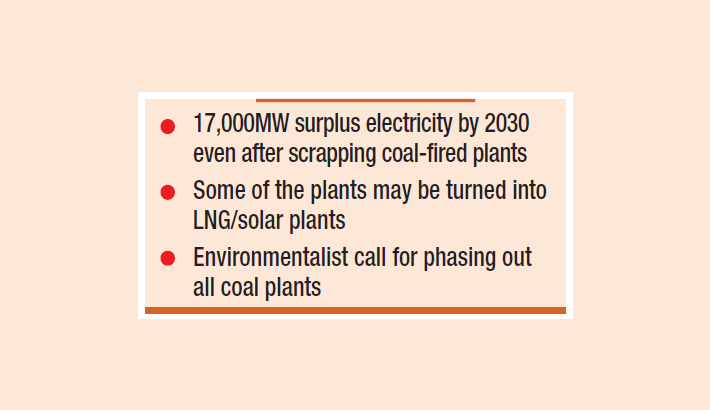 The government has decided to scrap proposed 10 coal-fired power plants due to difficulties in mobilising funds and concerns over environmental issues.

Prime Minister Sheikh Hasina has recently approved a summary paper in this regard, State Minister for Power and Energy Nasrul Hamid has confirmed.

“We have received the approval from the Prime Minister’s Office (PMO) on June 21 for scrapping those coal power plants,” another top official of the Power Division said.

The coal power plants were estimated to have the capacity to generate 9346 megawatts (MW) of electricity.

One more coal-based power plant might be added to the list as the fate of the 1320MW Mirsharai coal-fired plant will be decided by a cabinet committee.

Bangladesh is increasing focusing on renewable energy as part of its efforts to offset the impact of climate change, protect the environment and reduce its carbon footprint in the short and long term.

Prime Minister Sheikh Hasina is the chairperson of Climate Vulnerable Forum (CVF) and committed to strengthening climate action and adaptation efforts by enhancing the Paris Agreement, said an official concerned.

Bangladesh has assumed CVF presidency for 2020-22 for the second time after its successful tenure as CVF president in 2011-13.

Despite scrapping the coal power plant projects, the government has also decided to convert some of those power plants into LNG and renewable ones.

The government is expecting to generate at least 10,000MW of electricity from coal-fired plants by 2030.

However, the scrapping of those proposed plants will not have any significant impact on the country’s overall electricity generation capacity.

The scrapped coal-fired projects include three proposed plants in the private sector, four in the public sector and three joint-venture projects.

He also thanked the government, adding that the government should also take a roadmap to phase out the rest of the coal-fired plants.

“We have demanded to scrap all the coal-fired plants as like as other countries,” he said.

Bangladesh will produce 17,000 megawatts of surplus electricity by 2030 even after the scrapping of some coal-fired plants. Power Division informed Prime Minister’s Office about this in the summary paper on the 13 proposed coal-fired plants.

Some public power plants from the proposed coal plants will be converted to LNG-based plants of renewable ones if approved by the PMO.

Now, the coal-fired plants can generate only 8 per cent of 21,060MW grid electricity, according to the BPDB report released in May 2021.

Besides, the gas-fired plants have a capacity to generate 52 per cent of electricity from grid generation.

Earlier, the government has taken 17 coal-fired power projects to generate around 17,000 megawatts of electricity by 2030.

Of them, the implementation work of only four power plants including 1320MW joint venture plant, 1200MW Matarbari plant, 1320MW Payra plant and two private-sector plants in Chattogram and Barisal is underway.

A series of studies recently warned that the adverse impacts of the existing and under-construction coal-fired power could end up causing the deaths of around 71,000 people throughout their lifespan in the next 30 years, mainly due to air pollution, toxic deposition and other environmental hazards in Bangladesh.

The studies were conducted by the Centre for Research on Energy and Clean Air (CREA) with the support of Bangladesh Poribesh Andolon (BAPA).

Bangladesh must chalk out a transition to renewable energy in its new energy master plan towards zero-carbon goals, said the Institute for Energy Economics and Financial Analysis (IEEFA) in its latest report.

The author of the report, an energy finance analyst, Simon Nicholas said the upcoming Integrated Energy and Electricity Master Plan (IEEMP), if aligned to the government’s new five-year plan, will abandon coal and increased LNG commitment in favour of cheaper low emission renewables.

“Any increased reliance on coal and LNG risks seeing electricity costs for energy consumers rise even further at a time when cheaper solar and wind power is available,” according to Nicholas.

He recommended that the plan does not replace coal power proposals with price-volatile LNG-fired power given LNG’s expense and that its full life cycle emissions are comparable to that of coal.