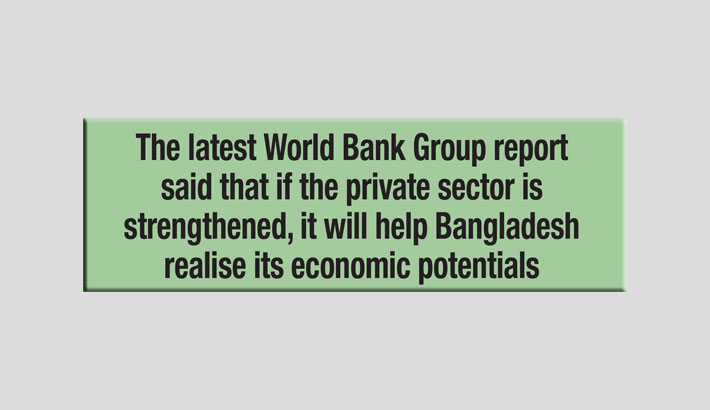 Bangladesh needs to embark on a new round of reforms to strengthen and modernize the private sector, said a World Bank Group report on Wednesday.

The report said the reforms would be needed in a bid to unleash the country’s potentials to drive diversified, export-led growth and create jobs.

The Bangladesh Country Private Sector Diagnostic (CPSD) report was prepared by the International Finance Corporation (IFC) and the World Bank.

“Bangladesh has been one of the biggest development success stories in recent decades. It’s now the time to switch gears to meet ambitions to transform into an upper middle-income country in the next decade,” the report said.

Salman F Rahman, private sector adviser to the prime minister, said the country had a positive GDP growth rate last year despite the adverse impacts of the COVID-19 pandemic.

“It was the only country in South Asia which did not experience a recession. We have prepared the Eighth Five-Year Plan keeping all the challenges of the pandemic in mind,” he said.

According to him, the CPSD recommendations were well aligned with the priorities of the government’s Eighth Five-Year Plan for setting a trajectory towards a prosperous Bangladesh by 2041.

Alfonso Garcia Mora, IFC’s vice-president for Asia and the Pacific, said the pandemic had hit Bangladesh hard and as the country recovered from COVID-19, the need for reforms would become even more compelling.

He said, “Finding new sources of income and growth will be an urgent priority.”

“The private sector, which already accounts for more than 70 percent of all investment in Bangladesh, supported by a strong financial sector, will need to play an important role in spurring the recovery so the country can grow, export and create quality jobs,” said IFC vice-president.

The report said the successful development of the ready-made garment sector and strong inflow of remittances, supported by prudent government policy choices, have been the key growth engines even during the pandemic.  It, however, said the country would need to diversify its export basket and develop a robust and sophisticated private sector.

Mercy Tembon, World Bank’s country director for Bangladesh and Bhutan, stressed that the moves should be relevant in the post–pandemic recovery phase “when public resources will be needed most in the social sectors.”

The report said the key priority areas for the reform agenda included creating a favorable trade and investment environment for domestic and foreign investors, modernizing and expanding the financial sector and removing impediments for developing infrastructure. “Transport and logistics, energy, financial services, light manufacturing, agribusiness, healthcare and pharmaceuticals sectors are among those with the strongest potential for private investment that could play a significant role in boosting economic growth,” it added.

The government of Bangladesh’s Perspective Plan 2021–41 sets the objective of becoming an upper-middle-income country by 2031, along with full employment and the elimination of extreme poverty.

As the CPSD report points out, challenges persist with more than 40 million Bangladeshis still living below the poverty line today, and nearly half the population vulnerable to falling back into poverty.

The private sector is responsible for 90 percent of jobs in the developing world. It is therefore critical to boost development of a broad-based private sector.

The findings of the report will be used to craft IFC’s strategic inputs for the World Bank Group’s new Country Partnership Framework with the government of Bangladesh, paving the way for joint programming to create markets and unlock private sector potential.