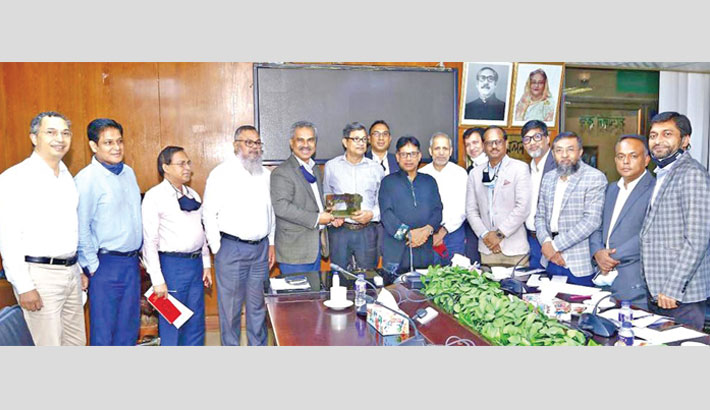 A delegation of BGMEA led by its President Faruque Hassan presents a souvenir to NBR Chairman Abu Hena Md Rahmatul Muneem during their visit at NBR in the capital on Wednesday.

Apparel entrepreneurs have urged the government to give policy support to the ready-made garment (RMG) industry to retain its competitiveness in the global market amid setback by the on-going pandemic.

Led by Bangladesh Garment Manufacturers and Exporters Association (BGMEA) president Faruque Hassan, its executive members made the call during a meeting with NBR chairman NBR Chairman Abu Hena Md Rahmatul Muneem at latter’s office in the capital on Wednesday.

In the meeting the BGMEA delegation urged the government to continue the existing 0.5 percent source tax for RMG sector for the next five years.

They requested that the rate of the income tax deduction on incentives be reduced from 10 percent to zero percent and keep it effective for next five years.

BGMEA also called on the NBR to keep the corporate tax rate at 10 percent for green factories and 12 percent for other factories for the next five years.