Mushfiq ruled out of DPL with finger injury 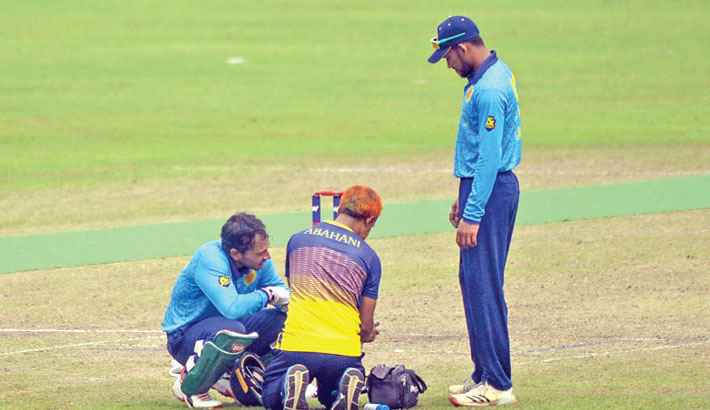 Wicketkeeper-batsman Mushfiqur Rahim was ruled out of the ongoing Bangabandhu Dhaka Premier Division T20 League after sustaining a fracture on his index finger of the left hand, confirmed Bangladesh Cricket Board on Tuesday.

Abahani Limited skipper Mushfiqur received the injury while gathering a throw from the deep during their last game against Gazi Group Cricketers on Monday in Dhaka.

“Today (Tuesday) we have done a scan of Mushfiqur and found a hairline fracture in the index finger of his left hand,” BCB Chief Physician Debashish Chowdhury told reporters.

“We have advised him for one week’s rest and so he is ruled out of DPL. As it is a hairline fracture we are hoping that it won’t take time for him to recover and after one week we will review the injury and later take a decision in this regard,” he added.

Mushfiq is the latest addition to the injury list of Bangladeshi cricketers ahead of their Zimbabwe tour as Tamim Iqbal and Taskin Ahmed aren’t also taking part in DPL Super League for their respective injuries.

Tamim is suffering from a knee injury while Taskin sustained an injury on his left thumb.

Opener Liton Das, who missed most of the matches of DPL due to wrist injury, only started his campaign in the league recently.

Pacer Mustafizur Rahman complained of back pain although the scan didn’t find anything serious.

Bangladesh are scheduled to play a Test along with three ODIs and three T20Is in Zimbabwe and they are expected to leave on June 29.