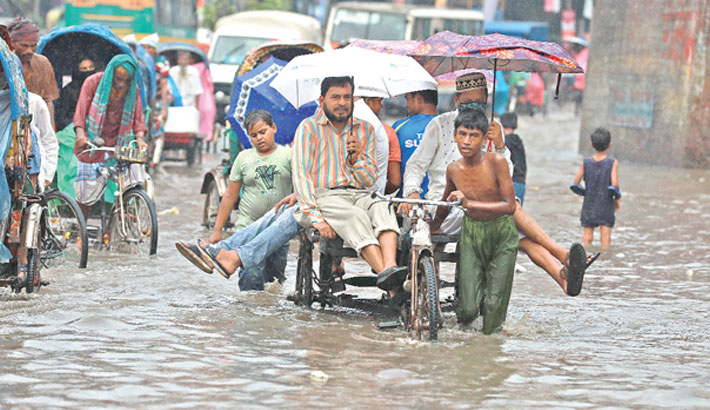 Rickshaw-van pullers struggle to make headway in knee-deep water in the capital’s Dayaganj area on Tuesday. Hours of morning showers led to waterlogging in many areas of the city, causing untold sufferings to people. —SUN photo

Copious seasonal showers led to waterlogging and traffic congestion in several parts of the capital on Tuesday morning, washing away the tall claims of monsoon preparedness by the civic bodies.

According to Bangladesh Meteorological Department, the metropolis received 18 mm of rainfall from 6am to 9am.

As usual, several areas of the city faced waterlogging problems—Mirpur, Kazipara and Shewrapara being the worst hit, reports UNB.

Light to moderate rains/thunder showers accompanied by temporary gusty winds are likely to occur at most places over the Khulna division in the next 24 hours, according to BMD’s weather forecast.

Also many places over Rajshahi, Rangpur, Dhaka, Mymensingh, Khulna, Barishal, Chattogram and Sylhet divisions are likely to witness similar weather conditions, while moderately heavy to heavy falls at isolated places may occur over the country, said the forecast.

As the synoptic situation in the forecast shows the monsoon trough is fairly active over Bangladesh and moderate over North Bay, there is no likelihood of rainfall activity stopping in the next 72 hours in the country.