They call for prudent policy to promote local industries 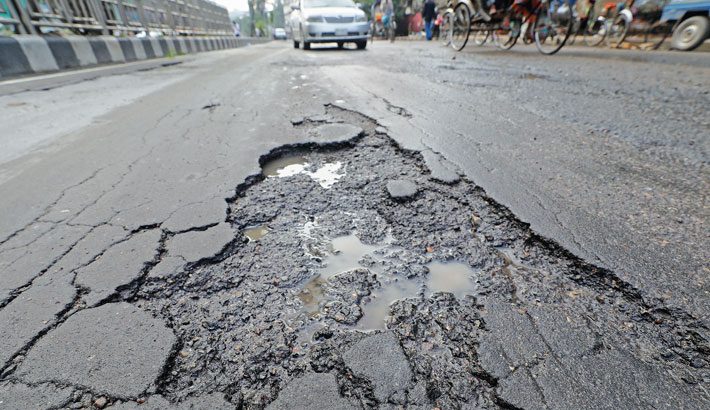 Rain has damaged an important road in the capital’s Arambagh area apparently due to the use of substandard bitumen during construction. The photo was taken on Tuesday. – Kamrul Islam Ratan

Fearing that the illegal import of bitumen from Iran may deal a blow to the country’s export basket, especially the ready-made garment (RMG) product, experts and businesspeople have called for formulating a prudent policy on an urgent basis to promote local industries and create employment.

They have underscored the need for strict government measures about the import of bitumen from Iran, which is facing international economic sanctions, to protect the country’s export and import businesses from any sort of complexities in future.

The experts have observed that as Bangladesh has the export and import businesses with many western countries, including the US, the import of any product from a country under sanctions may lead to complexities.

They have also expressed concern over the illegal shipment of bitumen from Iran, which is under sanctions from the USA and its allies, as a group of businesses are involved in importing low-quality bitumen illegally from the West Asian country via the United Arab Emirates (UAE).

Bitumen, also known as asphalt in the United States, is a substance produced through the distillation of crude oil that is known for its waterproofing and adhesive properties.

Considering the ongoing tensions between the USA and Iran, experts fear ‘possible sanctions’ from the United States on Bangladeshi export items, especially RMG product, if the illegal shipment of bitumen from Iran continues. Eminent economist Dr Ahsan H Mansur said the illegal shipment of bitumen from Iran may put the export basket into serious risk indirectly. “There’s an ultimate risk factor. At present, the volume of import is not significant. The USA may take any decision. If the volume increases, it may impose restrictions through diplomatic discussion. Restrictions may be imposed on a specific company instead of the entire country. However, I think it won’t happen anytime soon,” he told the Daily Sun.

Considering the present condition of geo-politics, Dr Ahsan further said, there is a pressure from the USA in the cross-border trade in Indian subcontinent.

“On other hand, we can’t deny any country in international business considering our diplomatic stance. In the case of bitumen import from Iran, we should look into the shipment to know whether violate the law or not. As the companies import the product through relabelling in the third country, there’s a little chance to prove the allegation against them,” he said.

Regarding the release of bitumen, Dr Ahsan mentioned that Customs should investigate the issue of over invoicing or fake documentation.

There are many countries that use the UAE port as buffer channel to ship freight to restricted destinations, the economist said, suggesting that the USA may run inter-government discussion to resolve the issue and then the illegal shipment to Bangladesh will stop ultimately.

About the illegal shipment of bitumen, President of Chattogram Chamber of Commerce and Industry (CCCI) Mahbubul Alam said the authorities should take measures to protect the local industry as bitumen is now being produced in Bangladesh.

About the bitumen import from Iran, he said original documents are not submitted during the import and the origin of the product is shown as different countries like India and the UAE. “As the market is now competitive, the import of bitumen should be discouraged to protect the local industries,” said the business leader.

“The authorities concerned, including the Customs, will have to take care of the issue in the country’s interest,” Mahbubul said, adding that they will welcome any step to be taken by the government for the sake of the local industries.

First Vice-president of Bangladesh Garment Manufacturers and Exporters Association (BGMEA) Syed Nazrul Islam said if the import of goods from Iran continues, it may leave a bad impact on different sectors. “The government should remain alert to the issue and work seriously so that no single matter can hamper the country’s trade and commerce.”