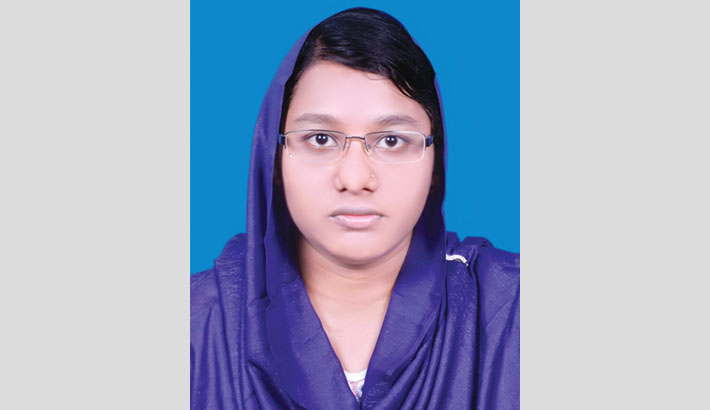 Today is June 23. This is a significant and memorable day for all of us. Today is the founding anniversary of the Bangladesh Awami League. On this day in 1949, the party at the heart of Bangladesh's independence was founded. Then, over time, it crossed numerous pathways, and today, the Awami League is 73 years old. With the formation of the East Pakistan Awami Muslim League on June 23, 1949, the party was born. A faction of the then Bengal Provincial Muslim League met at the Rose Garden Palace in KM Das Lane, Tikatuli, Dhaka, to launch the party. When the party was founded, Maulana Abdul Hamid Khan Bhasani was the president, and Shamsul Haque was the general secretary. While in prison, Bangabandhu Sheikh Mujibur Rahman, the Father of the Nation, was appointed the joint general secretary of the party.

The party's name in East Pakistan was "East Pakistan Awami Muslim League," but it was known across Pakistan as "All Pakistan Awami Muslim League," with Huseyn Shaheed Suhrawardy as its president. At the party's third convention in 1955, the word Muslim was eliminated from the name with the goal of making the party a political organisation for all Bengalis and fostering a non-communal mindset. The party has had a number of breakdowns since its establishment. In spite of the fact that different individuals of the establishing party afterwards left the party, but Bangabandhu was continuously with the party. In the course of the party's history, he was elected its acting general secretary in 1952, general secretary in 1953 and president in 1966. From then on, he led the party from the front for as long as he lived.

Bangladesh's freedom struggle was led by him. As a result, the Awami League is strongly identified with Bangladesh's founding. The party led us from the front during the Language Movement of 1952, the United Front election of 1954, the anti-Ayub (military) movement of 1962, the creation of communal peace after the riots of 1964, the Six-Point Movement of 1966, the Mass Upsurge of 1969 and the great Liberation War of Bangladesh in 1971.The party had taken and implemented a number of relevant programmes for Bangladesh's independence. The primary purpose of the party's formation was Bangladesh's independence and the economic emancipation of Bengalis. 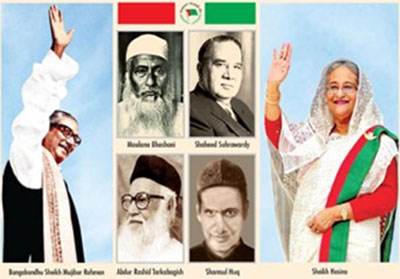 The Awami League party won multiple elections conducted at various times during Pakistani rule before Bangladesh's independence, reflecting the dreams and aspirations of the Bengali people. Bangabandhu's primary purpose at that time was to oust the Muslim League from power in East Pakistan and win Bangladesh's independence. With the 1954 elections approaching, the East Pakistan Awami Muslim League formed a united front with the Krishak Sramik Party of Sher-e-Bangla AK Fazlul Haque, the Pakistan Democratic Party, the Pakistan Khilafaht Party and the Nezame Islami Party. In the 1954 Provincial Assembly elections, the United Front won 223 out of 237 seats. The Awami League won 143 seats on its own. Bangabandhu Sheikh Mujibur Rahman was appointed as the Minister of Co-operatives and Agricultural Development. Bangabandhu was so committed to the party that he resigned from the ministry on May 31, 1956, just as the party needed to be restructured.

On February 5, 1966, at the Conference of Opposition Parties in Lahore, Bangabandhu submitted the historic "Six-Point Demand". This was one of Bangabandhu's most crucial and foresighted political decisions. After presenting the "Six-Point Demand", Pakistani officials labelled Bangabandhu the number one offender, filed the Agartala Conspiracy Case, and detained him. The people of Bengal were angry as the trial of the accused in the Agartala Conspiracy Case began at Dhaka Cantonment in 1968. There was a mass rebellion. Pakistan's military ruler Ayub Khan was constrained to leave. The case was pulled back on February 22, 1969 and all the charges brought against the Father of the Country, Bangabandhu Sheikh Mujibur Rahman, were withdrawn.

Following the election of 1954, the Awami League won the election of 1970 by a huge margin. With this election in mind, Bangabandhu chose the boat as the party's electoral symbol on October 17, 1970. The Awami League won 167 of the 169 seats in East Pakistan's National Assembly and 298 of the 310 seats in the Provincial Assembly in the 1970 elections. But when the government of Pakistan did not hand over power to the people of East Pakistan and started making excuses, Bangabandhu urged the Bengalis to be ready for the freedom struggle on  March 7, 1971 and officially declared the independence of Bangladesh in he early hours of March 26. On Bangabandhu's urging, the people of Bengal joined the Liberation War. Bangladesh became independent after a long and bloody war for nine months. The Awami League formed the government after winning a large majority in the country's first election. As Prime Minister, Bangabandhu concentrated on developing the country. However, he had to come to a halt in the middle of his nation-building activities. The killer's brutal bullet claimed the life of our nation's patriarch.

After that, there was a 21-year pause. After a long absence, the Awami League, led by Deshratna Sheikh Hasina, the daughter of Bangladesh's founding father, formed the government in 1996. The Awami League took power in 2008 after a surge in popularity. The party has been in power since then, having been elected by the people three times in a row. Prime Minister Sheikh Hasina has been the President of the Awami League for the past 40 years. Under her able leadership, the country is making progress today. The people of Bangladesh are progressing. We wish her well-being and pray for her long and healthy life. Bangladesh and Awami League are complementary to each other. Let Bangladesh reach the highest peak of success marching forward with the party-- this is our earnest desire on the founding anniversary of the party.

The writer is a student of the Department of Agronomy, PSTU