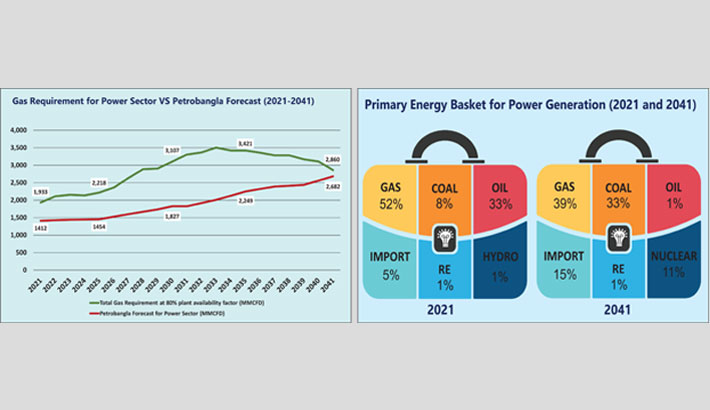 The government has decided to ensure sufficient gas supply to the power plants reducing dependency on the costly oil-based generation of electricity.

A recent inter-ministerial meeting discussed the shortages of gas supply at the power plants and decided to ensure sufficient gas to the plants for next three years without interruption until a long-term solution comes out.

The country’s existing gas-based power plans have a combined capacity of generating 10,880 megawatt electricity with around 52 percent share of the total grid capacity.

Due to supply shortage of natural gas, some of the gas-fired power plants remain closed every day, said an official at the Bangladesh Power Development Board (BPDB).

He said the BPDB would need around 1541mmcfd of natural gas to feed their 10,880MW plants.

While talking to Daily Sun on Tuesday, the official said, “We could not produce around 5000 MW of electricity despite having the capacity from the gas-fired plants because of the gas supply crisis.”

However, officials at Bangladesh Minerals, Oil and Gas Corporation, known as Petrobangla, the gas supply was being rationed to different sectors from last fiscal year, for which, the power plants were not getting sufficient gas as they needed.

They said the plants needed more 521mmcfd natural gas, which Petrobangla could not ensure it due to the rationing.

A BPDB official said the supply shortage of natural gas to the power plants increased to 714 mmcfd in the current fiscal year, forcing the authorities to get more electricity from the expensive oil-based plants.

The demand and supply gap of the gas to the power plants might widen to 1167 mmcfd in the FY2028-29 if the trends continued, the officials feared. According to them, the power ministry has been requested to think of way-out of the crisis so the electricity could be generated from low-cost sources.

Considering the situation, the Ministry of Power, Energy and Mineral Resources held the inter-ministerial meeting to discuss the matter.

Then, the ministry formed a committee and asked the committee to submit a report on how to overcome the gas crisis at the power plants, the officials said.

When asked, he told the Daily Sun that the meeting decided to ensure supply of the required gas to the power plants for next three years.

He said the meeting also discussed about taking necessary steps to overcome the crisis in long-term.

A Power Division official said they would request the BPDB to submit the actual year-based requirement of the gas for the power plants.

Currently, the Petrobangla is supplying 3145 mmcfd natural gas to the power plants.