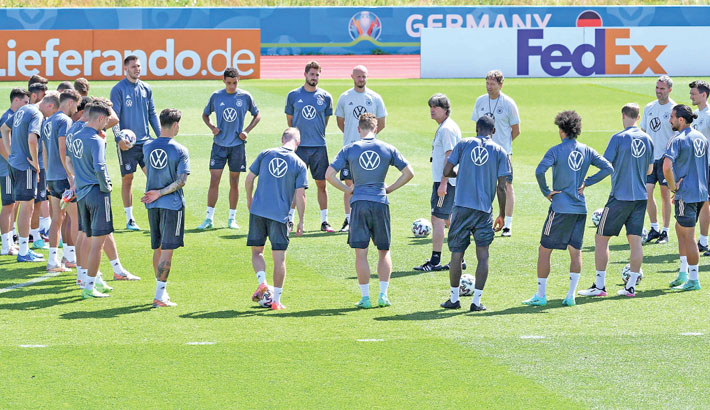 Germany players take part in a training session at their base in Herzogenaurach on Monday during the UEFA EURO 2020 football championship. – AFP PHOTO

Mats Hummels, Thomas Mueller and Ilkay Gundogan face a race against time to be fit for Germany's Euro 2020 match against Hungary on Wednesday with qualification for the last 16 at stake.

The trio all sat out training Monday after picking up knocks in Saturday's 4-2 win over Portugal which left Germany second in Group F following a defeat by France in their opening game.

Hummels and Mueller are both resting knee injuries, while Gundogan took a blow to the calf.

German daily Bild claim Mueller will miss the Hungary game on Wednesday, but a DFB spokesman denied the report and insisted it was too early to say.

If Mueller drops out, his Bayern Munich team-mate Leon Goretzka is ready to switch from his usual position in central midfield to an attacking midfield role.

"The way he (Mueller) was moving in the (team's hotel) pool, I don't think it's out of the question that he'll play," said Goretzka, who was a second-half replacement against Portugal.

"I've already said that I think I can play that (attacking midfield) role, but I hope so of course that Thomas can play."

Germany need a win to be sure of reaching the knockout phase, but a draw would be enough if France do not lose to Portugal in Budapest on Wednesday.

Hungary, who are bottom of the group with a point after Saturday's 1-1 draw with France, must win to avoid elimination.

Replacement right-back Lukas Klostermann, who has yet to play a minute at Euro 2020, also sat out Monday's session at Germany's camp in Bavaria with a hamstring strain.