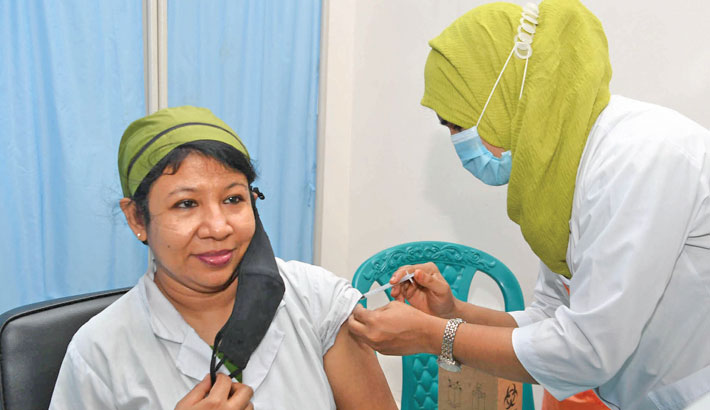 A nurse of Dhaka Medical College Hospital administers a Sinopharm Covid-19 vaccine to her fellow on Monday. Doctors, students and nurses of the hospital get the jabs after the first dose of corona vaccine resumed on Sunday. —SUN photo

Bangladeshi students studying in various universities and medical colleges in China have urged the government to priorities them while providing Sinopharm vaccines.

They claimed that if they do not get the vaccine produced in China, they will not be allowed to enter the country.

The students made the demand from a human chain in front of the Jatiya Press Club on Monday.

Students studying in China in the human chain claimed that the government once promised to give Chinese-made vaccines to students stuck in Bangladesh, but now they are not in the priority list.

As a result, even after being stuck for more than one and a half years, they don’t know when they would be able to return to China.

They demanded the government to bring Bangladeshi students studying in China under vaccination on an urgent basis.