Bangladesh to give loan to 2 more countries: Hasan 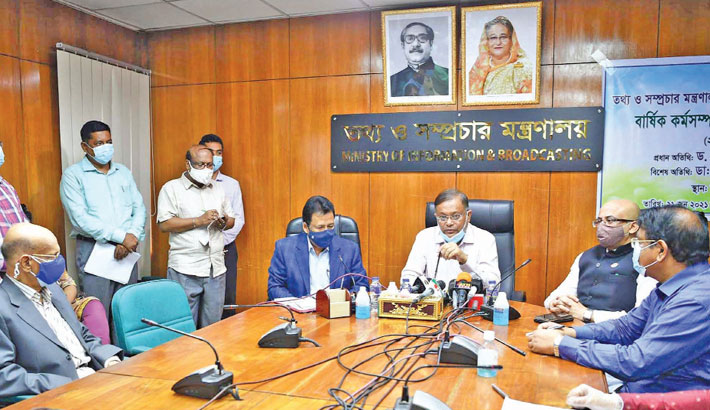 Information and Broadcasting Minister Dr Hasan Mahmud speaks at the signing ceremony of ‘Annual Performance Agreement’ with different organisations under the ministry for the fiscal year 2021-22 at the Secretariat in the capital on Monday. State Minister Dr Md Murad Hassan was present. —SUN PHOTO

Information and Broadcasting Minister Dr Hasan Mahmud on Monday said that Bangladesh is now giving loan to other countries, which is indicative of the country’s tremendous development.

“Bangladesh has now become a country lending money to other countries. Process is now going on to give loan to two more African nations,” he said.

Hasan, also the joint general secretary of the Awami League, said this while addressing a press conference on contemporary issues at his secretariat office in the capital.

The minister said it is now a reality that Bangladesh has given $200 million loan to Sri Lanka for ten years.

In the last 12 years, he said, poverty rate has decreased from 41 percent to 20 percent, while the country has graduated from least developed country status to middle income one.

Once the country’s budget depended on the meeting of Paris Consortium and finance minister had to rush there for loan, but things have now changed a lot, he said.

Referring to the anti-government propaganda spread by vested interests, Hasan said BNP and its allies are involved in conducting such vicious campaign.