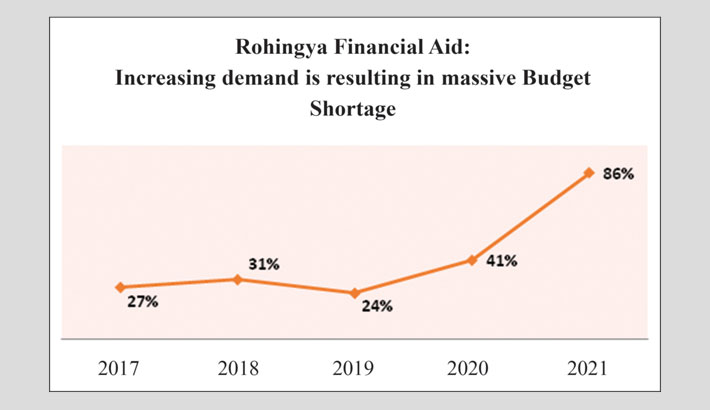 It is a well-known fact that camps accommodating Rohingya people at Cox’s Bazar are the largest in the world. Since the crisis began, the Bangladesh government and international organisations related to camp management have been facing hurdles in ensuring accommodation and basic human rights in such a small area. The camps also take a heavy toll on the environment as hills and forests were destroyed to house this large number of people. The density within the camps is still 40-50 thousand per kilometre, which is far below the standard. The camps are also taking a heavy toll on the local demography and local administration. Drugs, contrabands and other crimes are rampant. In this context, to reduce the pressure from Cox’s Bazar, the Bangladesh government decided in November 2017 to relocate one lakh Rohingya to Bhasan Char where the Rohingyas would get a better environment, housing facilities along with income-generating sources compared to their present residence in Cox’s Bazar.

A faction of the global community and rights groups, however, didn’t welcome the independent decision taken by Bangladesh, due to misconceptions about Rohingya’s safety and security. Still, the government went ahead and transformed Bhasan Char, a barren island, into a cluster of 120 residential areas without any aid or foreign assistance. Till now, it is the most efficient and highest facility camp among the sheltering countries.

Despite the prima facie satisfaction of various UN organisations and delegations from donor states, Human Rights Watch (HRW) has started a smear campaign against the Bhasan Char programme. HRW's recent report titled 'An Island Jail in the Middle of the Sea' paints a grim picture of the island to tarnish the image of Bangladeshi authorities. However, these propagated reports fall short of any empirical data and evidence. Especially after the UNGA president Bozkir’s satisfactory remark on the project, “I really applaud the work done there – the quality of buildings and also taking all the precautions. I think this will be another example to the world on how to deal with such issues.” Earlier in February this year, an OIC delegation also expressed their prime satisfaction with Bhasan Char arrangements. In March, a delegation from the UN also visited the island and after thorough ground work and interviews with locals for three consecutive days, they were convinced. Moreover, in the following month of April, Bangladesh hosted ambassadors of 10 states and they paid their visit to Bhasan Char without any hassle or hurdle. Thus, time and again, Bangladesh has proved all those allegations wrong.

Moreover, it deems that humanitarian groups and profit-driven NGOs have forgotten that Rohingyas are the 'citizens' of Myanmar, where a genocidal regime has halted the access of HRW on its soil. Therefore, arrows of criticism should be directed towards Myanmar, not Bangladesh. To these post-colonial champions of the global conscience, let the international community just say that if Bangladesh is forced to keep the nearly one million Rohingya just because the global superpowers and regional powers are failing to force a brutal Myanmar military regime to take them back, the Bangladesh government will keep them whereever it can and in which way it can. Any dictation from Washington or New York, London or Brussels, Istanbul or Riyadh is uncalled-for noisemaking at best and an infringement on Bangladesh’s hard-earned sovereignty at worst.

Though the world still hasn’t forgotten the plight of Rohingyas, they have surely forgotten about the aid and assistance. Day by day, the inward flow of aid and assistance is decreasing, resulting in a budget shortage for camp management. After all, it is a costly matter to run the world’s largest camp. From 2017 to 2021, the budget shortage rose from 27% to 86% within three and a half years only. The scenario could be different if they did not take Bhasan Char as a ‘prestige issue’ and cooperate with finance and technology.

As at present, due to political instability in Myanmar, the repatriation process is on halt. The world community’s warm acceptance of the Bhasan Char project is a matter of solace for Bangladesh. Still, Bangladesh is struggling with camp management financially as the budget shortage is increasing day by day. Thus, the international community must reaffirm its funding and assistance in this regard.