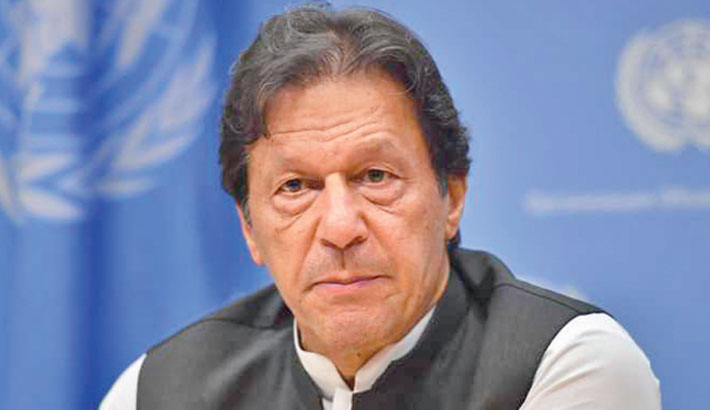 ISLAMABAD: Pakistan’s prime minister has created a stir over comments he made about US operations in Afghanistan and China’s treatment of Uyghur Muslims, reports BBC.

In an interview with Axios HBO, Imran Khan categorically stated that he would not allow the US to use Pakistan as a base for its Afghan operations.

He also asked why the world was fixated on Xinjiang while ignoring what India was doing in Kashmir. The comments have generated debate on Indian and Pakistani social media. The interview with Khan was aired early on Monday morning and immediately started gaining traction as people began discussing his comments.

Axios had already released his comments about the US and Afghanistan ahead of the interview’s broadcast.

Khan told the interviewer, Jonathan Swan, that he would “absolutely not” allow the US to have the CIA in Pakistan to conduct cross border counter-terrorism missions against al-Qaeda, the Islamic State group, and the Taliban.

Pakistan’s cooperation is seen as critical to US President Joe Biden’s plans to completely withdraw US troops from Afghanistan by September. Khan has always been opposed to the US using Pakistan as a base from which to launch operations, and his comments follow similar remarks made by Pakistani government officials.

This stance won a lot of praise in Pakistan with the term #AbsolutelyNot trending in the country.

But Khan’s comments on China, Xinjiang and the treatment of the Uyghur Muslim minority were only released on Monday - and have not been welcomed as enthusiastically. Reiterating that Pakistan spoke to the Chinese on any issues they had “behind closed doors”, Khan asked why what India was doing in Kashmir - which he likened to an “open-air prison camp” - was not an issue, calling it a matter of “hypocrisy”.

The Kashmir region is claimed in its entirety by both India and Pakistan, though both sides only control part of it.

The two nuclear-armed neighbours have already fought two wars and a limited conflict over Kashmir.

In 2019, India moved hundreds of thousands of troops into the part of the region it controlled, locked up thousands of people including elected politicians, and stripped Indian-administered Kashmir of its special status.

Pakistan and Imran Khan led international outrage over the issue and called for action to be taken against India.

“I care about what is happening on our border,” he said, prompting the interviewer to point out that China was also on Pakistan’s border.

But  Khan said that Pakistan “respect[s] the way they [China] are and whatever issues we have we speak behind closed doors”.

He said that China has been one of the “greatest friends” to Pakistan at its most difficult times, adding that “when we were really struggling and our economy was struggling they came to our rescue”.

Khan’s comments attracted attention in both India and Pakistan, many of which were critical, and accusing him of having sold out.

In India, where there was anger over Khan’s comments on India and Kashmir, users accused him of being a sell-out to China, and said he would never be taken seriously.

His offer of talks if India were to restore Kashmir’s special status have also been rebuffed as a “stunt”.