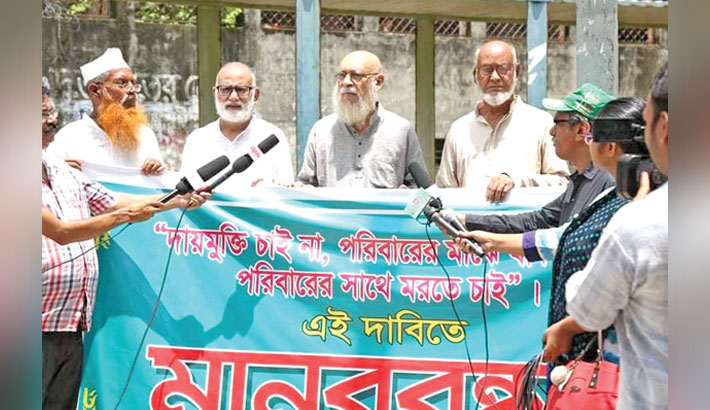 A scene from the movie ‘Dai Mukti’

Popular actor, playwright and director Abul Hayat has won the hearts of millions with his powerful performances on both the small and silver screen over the years. The veteran actor will now be seen in a key role in the movie ‘Dai Mukti’ directed by Badiul Alam Khokon.

The shooting of ‘Dai Mukti’ has almost been completed. According to maker, the government-granted movie is now on the editing table.

The story of the film revolves around an old age home. Abul Hayat lives there with other elderly people. But, they always want to live with their family. One day, the inmates from the old age home hold a human chain led by Abul Hayat demanding that they should live with their children and grandchildren. Some university students also joined them. Thus, the story of the film continues..

About the film, Abul Hayat said, “In our modern society, many people send their parents to old age home. They think this is the right place for their old parents. But, older people want to spend time with their grandchildren in their last days of life. The movie ‘Dai Mukti’ has been made on this issue. This is a very emotional and social story. I liked the story of the film. I hope the audience will like the movie too and children will be aware for their parents.”

Badiul Alam Khokon said, “The issue of disrespecting to parents is increasing day by day in our society. From my social responsibility I’ve made the movie. I hope the audience will like our work.”

Asaduzzaman Majnu is the cinematographer of the film.

Abul Hayat is a prominent actor, writer and director. He earned Bangladesh National Film Award for Best Supporting Actor for the film ‘Daruchini Dwip' and was awarded Ekushey Padak for his acting in 2015 by the Government of Bangladesh. His latest film was Tauquir Ahmed directorial ‘Sphulingo’, which was released on the occasion of the golden jubilee of Bangladesh’s independence.