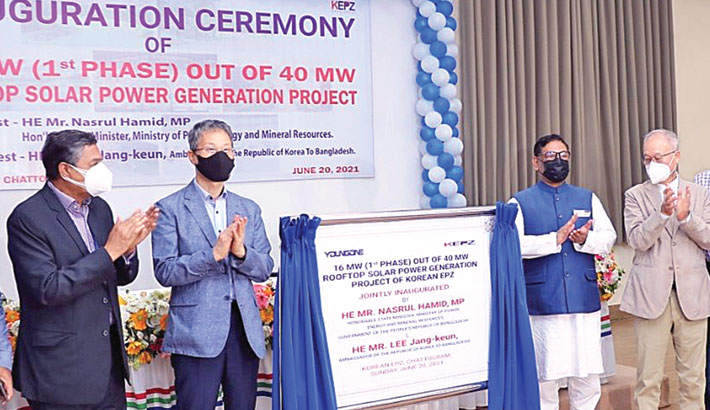 State Minister for Power, Energy and Mineral Resources Nasrul Hamid poses for a photo after inaugurating the 16 megawatt rooftop solar power plant at Korean EPZ in Chattogram on Sunday. Republic of Korea Ambassador to Bangladesh Lee Jang- Keun and Korean EPZ Chairman Kihak Sung were also present on the occasion.

State Minister Nasrul Hamid said, “Korea is one of the old development partners of Bangladesh.It is encouraging that Youngone Corporation has installed 16MW of rooftop solar power plant under the government's net metering scheme.”

The state minister lauded the Youngone, especially its chairman Kihak Sung, for making it one of the largest corporations in the world.

“The government under the leadership of Prime Minister Sheikh Hasina is committed to increasing the share of renewable energy in the energy mix,” Nasrul Hamid said.

“We have set a national target of 40 percent electricity from renewable energy sources by 2041. As Bangladesh is a densely populated country, scarcity of land poses significant challenge to achieve such a steep target,” the minister observed.

“However, the rooftop solar offers a feasible application to scale up solar power generation. Such endeavor is compliant with Net Metering Guidelines formulated by the Power Division,” he said.

The state minister said under the purview of these guidelines, electricity consumers could connect their rooftop solar system to the distribution grid.

“Thus, any surplus electricity generated from rooftop solar and supplied to the grid will ensure financial benefits of the consumers.”

“I think  it would be very beneficial for both Korea and Bangladesh if more and more investors invest in the power sector of Bangladesh,” he said.

“It is especially impressive that KEPZ has never stopped nor slowed down amid the corona pandemic. All the factories have been in operation. They are manufacturing and exporting products,” he said.

“KEPZ is not only bringing business to Bangladesh and contributing to the local employment, it is also setting a new and high standard of industrial development of Bangladesh,” the ambassador observed.

“The 40MW rooftop solar panel project is not only saving money and production cost, but will also make the KEPZ and its business sustainable and resilient. It is perfectly in line with the Bangladesh government’s vision and energy strategy,” he added.

“We are aware that electricity consumption has increased in line with the rise in capacity. Domestic and industrial sectors are the key power demand drivers in the country,” said the chairman.

Bangladesh has continuously added power capacity at an impressive growth rate in the last five years, he observed.

“Considering these and to meet up the fast growing demand of energy at our own industries, Korean EPZ has started implementing a 40MW rooftop solar power generation project,” he said.

“The vision of the project is not only to harness the power of the sun to meet its increasing energy needs in a sustainable manner but also provide any surplus renewable energy to the national grid, demonstrating its commitment on social responsibilities,” Kihak said.

He also informed that the power plant is connected to the national grid and eligible for exporting excess power to the grid under net metering system.

The project at an estimated cost of $40 million will be executed in three phases and cover all the roof top of the buildings at the EPZ.

In the first phase, 16MW plant has been installed at a cost of $16 million and it was inaugurated on Sunday.

Work on a 4.3MW system that involves a cost of $4.3 million is expected to be completed by October this year in its second phase.

The remaining 20MW is planned to be set up as an Independent Power Plant (IPP) within 12 months in the third phase, which will require approval from the government.