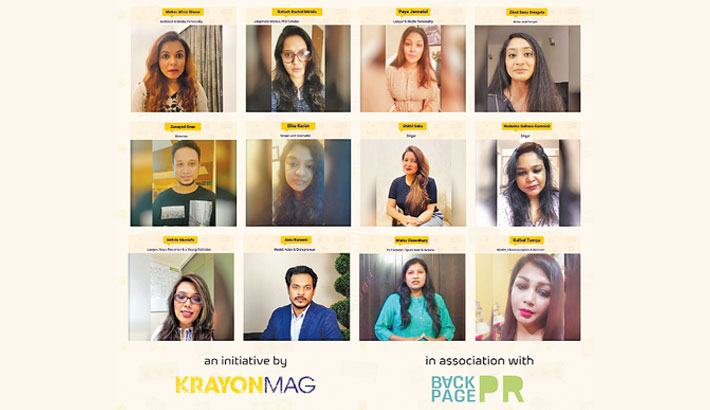 Celebrated actors and artists have echoed to increase inter-personal knowledge sharing to secure internet amid growing concern on cyber bullying.

The stars shared special post on mass awareness on safety measures on cyber space.The International day has been observed across the world on third Friday on June every year since 2016.

In the video message, singer Elita Karim mentioned that she avoided sharing the negative news on social media which inspire geeks on cyber bullying.

Citing a study, Elita further informed that around 80 percent victims of cyber-bullying are women representing age group between 13-23 years. Besides, boys also experience bullying on internet.

Actor Peya Jannatul said she has capability to protest against cyber-bullying though most of the women in the country remain silence on this issue amid adverse situation.

She also urged all to term the attacker as criminal rather than to colour the victim.

As part of this campaign, a special talk show was organized on Radio Today. Actresses Meher Afroz Shaon and Rafiath Rashid Mithila joined the podcast along with journalist J I Mamun.

Regarding the campaign, KrayonMag founder Tanziral Dilshad Ditan said the organisation tried to design a mass campaign to aware all about the danger of cybercrimes.

"Mostly girls are victims of cyber bullying In Bangladesh and elsewhere in the world. Besides, the boys also experience so. We dream a safer cyber space for all and elimination of the problem from Bangladesh, "she said.

Since commencing journey in 2020, KrayonMag has been advocating on social causes apart from raising voice against social stigma, inequality and partiality.