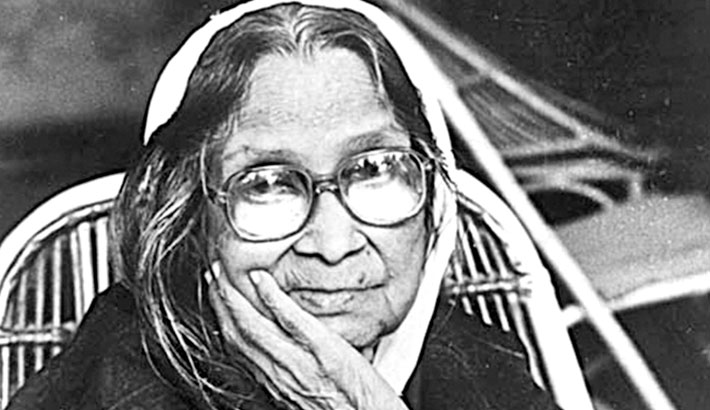 Except for the soil, there is no such thing as a flowering plant, except for my mother. Before I was born, my grandmother named me Hasna Banu after hearing 'Hatem Taiyer Kechcha' from her mother. My grandfather passed from Sadar Ala to Jaigiri in his early years and at last she attained the name of Sadhak-Darbesh. I heard that the day I was born, she named me Sufia Khatun with honey in my mouth. But my nickname Hasna Banutai is common in our family. Some people still don't recognise me, says Sufia. My brother used to call me ‘Hachubanu’ when I was young. Some people used to say ‘Hasubanu’. This is how the poet Sufia Kamal described her birth in her article titled “Ekale Amader Kal”. She seems to have realised from birth that she needs to bring about a radical change in this social consciousness. That is why she has fought against all irregularities under the banner of social change.

Sufia Kamal was born on June 20, 1911 in the Shaishtabad Nawab family of Barisal. Her father Syed Abdul Bari was a lawyer by profession. Sufia's father left home when she was seven years old. In the absence of her missing father, she was brought up in the care of her mother Syeda Sabera Khatun. Despite growing up in the conservative aristocratic environment of her grandparents' home in Shaistaganj, the country, the people, the society, the language and culture served as the main inspiration of Sufia Kamal.

Sufia Kamal was born during the formulation of new social norms. World War I, the independence movement, the Muslim Renaissance, the Russian Revolution, the new discoveries in the world of science, the new beginnings of literature and culture, all these left a deep imprint on her childhood.

Although she did not have much formal education, she had a strong motivation. There was an indomitable spirit of revival in that humiliated society. She got married to her cousin Syed Nehal Hossain in 1923 when she was only 12 years old. However, her intense desire to overcome the darkness did not subside with the marriage. With the inspiration and courage of her husband Nehal Hossain, Sufia Kamal started social service and literary practice. Being engaged in social work, she easily moved in the company of backward women. She was worried about the picture of their misery and the backwardness of women.

The life of the poet went through various blows and retaliations. At the age of 21 she lost her husband Nehal Hossain in 1932. The family's economic helplessness did not exhaust her. She has conquered humanity by straightening her spine. Many people cooperated with her. First of all comes the name of Kamaluddin Khan, who married Sufia Kamal in 1939 and became her partner for 36 years. She lost her mother in 1941. She lost her son Shoaib in 1983 and then lost her husband Kamaluddin Khan in 1986. She did not give up in desperation but continued with her valiant work, protesting against all injustices through her literary works.

Sufia Kamal also joined the language movement of 1952. Not only that, also when the government of Pakistan banned Rabindranath as part of its policy of suppression of Bengali language and culture, she also strongly protested against it. In 1971, on the centenary of Rabindranath's birth, she led the 'Cultural Freedom Movement'. When the Mahila Sangram Parishad (now Bangladesh Mahila Parishad) was formed in 1979, she was elected its founder-president and she was involved in it all her life. Even after independence, Sufia Kamal established and managed many organisations. Organisations of which she was the founding head of are: Bangladesh Women's Rehabilitation Board, Bangladesh Rural Development Committee and Rehabilitation Organisation for the Poor. She was also the President of Cchayanat, Bangladesh Disability Foundation and Women's Welfare Organisation.

However, Sufia Kamal had her own views and values about women's emancipation, which is why she emphasised women's emancipation as well as principles, ideals and traditions. Sufia Kamal, a pioneer of the women's movement, is a role model for today's women. It is the responsibility of all women today to protect the respect that Sufia Kamal has brought to women by protecting their rights. Bengali culture should not become extinct in the face of modernity. All women must emulate Sufia Kamal in order to face the blows of life with respect. All irregularities against women must be stopped altogether.