1430 homeless families to get houses in Gaibandha 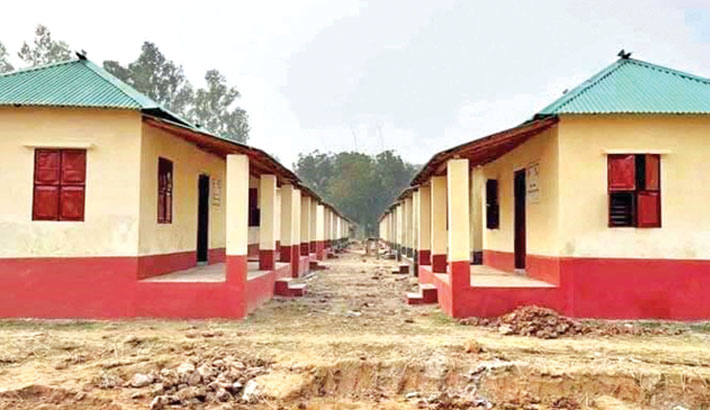 These semi-pucca houses will be distributed among the homeless families in seven upazilas of Gaibandha district under the second phase of the Asrayan-2 project on Sunday. Prime Minister Sheikh Hasina will virtually distribute these houses. — SUN PHOTO

GAIBANDHA: A total of 1430 homeless families of seven upazilas in the district will get semi-pucca houses with the documents of the land ownership as the gift from Prime Minister Sheikh Hasina on Sunday.

Gaibandha Deputy Commissioner Abdul Matin said this while he was talking to journalists this morning.

The premier is scheduled to inaugurate the distribution of these houses virtually on June 20 (Sunday) under the second phase of the Asrayan-2 project, the DC added.

Earlier, Prime Minister Sheikh Hasina handed over 69,904 houses to the homeless and landless families on January 23 under the first phase of the project on the occasion of the birth centenary of Father of the Nation Bangabandhu Sheikh Mujibur Rahman, the DC further added.

The DC instructed the UNOs here to attend the inaugural ceremony on Sunday morning around 10.30 AM taking the selected beneficiaries at the respective upazila headquarters of the district, he mentioned.

In Sadar upazila, the district level officials led by DC Abdul Matin would attend the function taking the selected beneficiaries of Sadar upazila at the auditorium of Zila Shilpakala Academy of the district town. Whip of the Jatiya Sangshad and local lawmaker Mahabub Ara Begum Gini would also attend the function and is likely to talk to the premier virtually, the DC concluded.