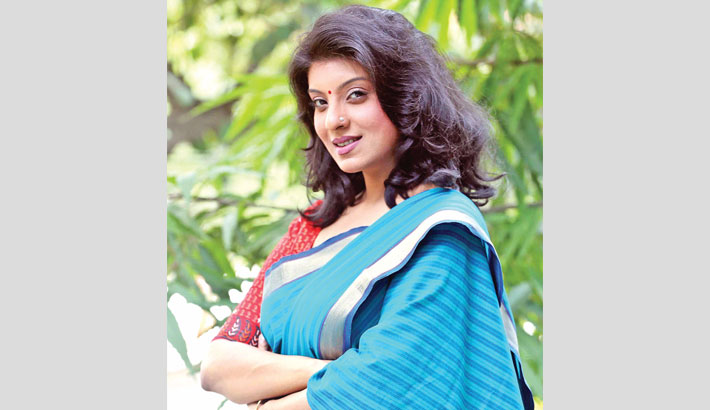 Sadia Islam Mou is a popular model and television actress of the country. She has won the hearts of millions by appearing in some famous television advertisements.

The talented artiste also has appeared in some audience-acclaimed dramas and telefilms. Mou will now be seen acting in a telefilm titled ‘Ondho Jolchobi’ after a long hiatus.

Directed by Chayanika Chowdhhury, Iffat Ara Tonni has written the script for the production. The shooting of the telefilm took place at a location in the capital on June 16 and 17.

Chayanika Chowdhhury has confirmed the news on a Facebook post recently. She said, “For the first time Mou has worked under my direction. She was very attentive to her work. She came to the set 15 minutes before starting the shooting. Mou has also impressed me with her work. I want to do more works with her.”

The story of the telefilm revolves around the journey and struggle of a successful corporate woman named Kaynath. Mou will play as Kaynath. Kaynath is a hard-working woman. She has come to her today’s position with a lot of ups and downs.

Besides Sadia Islam Mou, Khairul Basher, Moushumi Mou and others will be seen in the ‘Ondho Jolchobi’.  Produced by Dolly Iqbal, the telefilm will be released on a private TV channel soon.

Sadia Islam Mou is a noted model and actress. She stepped into the modeling world in 1989. Her first advertisement on Mount Shampoo was done by Saidul Islam Tutul almost 31years ago. However, it is commonly accepted that till today no one has surpassed Mou.

Besides being a model-turned actor, she is also renowned for her enthralling dance moves, an art that she still practices with devotion.

Mou married actor and director Zahid Hasan. Together they have a daughter, Puspita and a son, Purno.