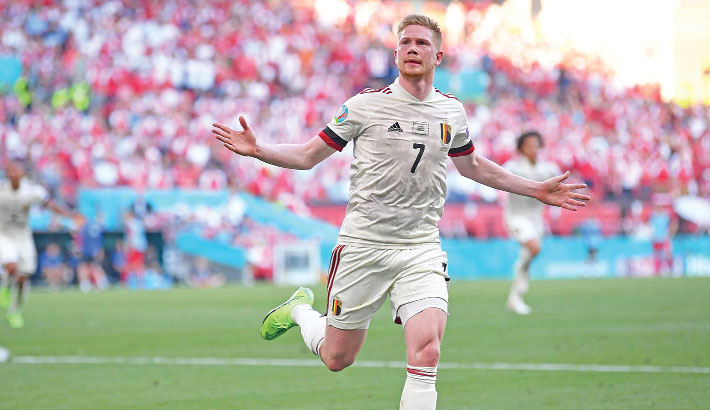 Kevin De Bruyne scored the winner as Belgium beat Denmark 2-1 to reach the knockout stage of Euro 2020 on Thursday in Copenhagen, where fans and players showed their support for Christian Eriksen, while the Netherlands also booked a last-16 spot.

De Bruyne claimed a goal and an assist with an excellent second-half display as a substitute as Roberto Martinez's Belgium denied Denmark a crucial point in Group B.

"We can be happy," De Bruyne told RTBF. "We knew that there would be difficult moments against Denmark and in front of this crowd, with everything that happened."

Five days after Eriksen required emergency medical treatment to revive him in Denmark's opening loss to Finland, his team were back in action at the same venue.

With the Inter Milan midfielder potentially within ear-shot, recovering at Rigshospitalet less than a kilometre away, the Danes took a second-minute lead to send the 25,000-strong crowd wild as Yussuf Poulsen fired into the bottom corner.

It was the second-quickest goal in European Championship history.

Belgium kicked the ball out of play after 10 minutes as the players and supporters held a minute's applause for Eriksen, who usually wears the number 10 shirt.

The 29-year-old is to be fitted with a defibrillator after suffering a cardiac arrest.

The hosts had chances to double their lead, but the game was changed by the half-time introduction of De Bruyne for his first appearance of the tournament after suffering facial fractures in Manchester City's Champions League final loss to Chelsea.

The midfielder showed great composure to tee up Thorgan Hazard to tap in a 55th-minute leveller, before running onto fellow substitute Eden Hazard's clever pass and hammering a left-footed strike past Denmark goalkeeper Kasper Schmeichel with 20 minutes remaining.

Belgium join Italy in the last 16, sitting three points clear of Russia and Finland -- who they face in Saint Petersburg on Monday needing a point to finish top of the Group B table.

Denmark still have a chance of reaching the next round, as a win over Russia in their final group game in Copenhagen could potentially see them through.

Frank de Boer's Netherlands marked their return to major tournament football after a seven-year absence by reaching the last 16 with a game to spare after a 2-0 win over Austria in Amsterdam.

Denzel Dumfries, who scored the winner in a dramatic 3-2 victory over Ukraine on Sunday, won a penalty for a foul by Austria captain David Alaba which was scored by Memphis Depay in the 11th minute.

The 25-year-old Dumfries, who plays for PSV Eindhoven, slotted home to finish off a brilliant attack led by Depay and Donyell Malen with 23 minutes to play.

Ukraine edged out North Macedonia in the group's other game with a 2-1 victory in Bucharest as Andriy Yarmolenko and Roman Yaremchuk both scored their second goals of the tournament.